Yesterday, I forgot to include a photo of this little cup from the last firing. Actually, it was really a test piece, to see how one of my black slips would look over the matte ochre ash glaze. I rather like the way the brushwork has merged with the glaze layer so it doesn't look too harsh. 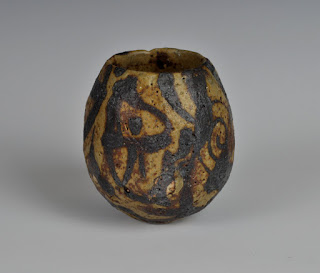 Next time, I'll try a blue slip over this yellow glaze, that could be interesting too!
Posted by Mark Smalley at 03:09