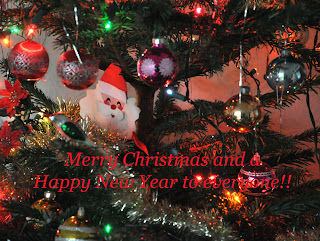 To all who celebrate it, I wish you a happy and peaceful Christmas and New Year. I hope all the artists out there have an enjoyable, creative and successful 2012!

Turkey, Christmas pudding, mince pies, chocolates, wine, beer....sigh, the diet will have to wait again until next year. Shame..
Posted by Mark Smalley at 05:03 No comments: 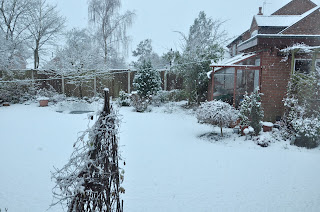 Somehow, the thought of plunging my hands into buckets of water and throwing clay doesn't seem very appealing today..

Looks like we might be in for the same kind of winter we had last year and the year before.. absolutely freezing!
Posted by Mark Smalley at 05:38 No comments:

I've just been watching a very pleasant interview with John Leach, the Potter. For anyone who would like an introduction to the world of handmade ceramics, it offers an interesting overview of life in a traditional pottery workshop. John Leach has a fair amount of experience, having been a potter for over fifty years!

Posted by Mark Smalley at 17:01 No comments:

I fired the electric kiln to cone 9 this week and some exciting pots and test pieces have emerged! This large tea bowl was decorated mainly with a red clay and iron oxide slip..the thinner lines were made using the black slip (which contains red clay, manganese dioxide, cobalt oxide, red iron oxide and Masons black stain).

The glaze is a traditional shino comprising mostly of nepheline syenite and it has bubbled vigorously on the outside. What's really interesting is that the same glaze hasn't produced this volcanic effect on the inside, or over the bare clay.

﻿
The bubbling seems to be caused by a combination of slightly thicker glaze application and higher temperature, but I suspect that the main reason is decomposition of the red iron oxide which releases oxygen and this has to try and escape from the glaze. Red iron oxide Fe2O3 lets go of an oxygen atom at around 2250 F (1232 centigrade) and becomes black iron oxide (FeO). Where the glaze is thicker, and there is a heavier application of slip, I am guessing that the oxygen can't escape the glaze layer so easily and produces bubbles and craters.
In the case of this tea bowl, the bubbles have produced a smooth, sugar-fosted kind of texture, which is very pleasantly tactile, so on the whole, I'm pretty happy with it.

Here are two lidded jars, decorated in a similar way:

I also brushed on more of the orange matt, calcium glaze onto a previously fired vase and it came out anything but matt! It was fired in the saggar under quite heavy reduction and the titanium dioxide has created some wonderful glaze effects:
The only problem I'm experiencing with this glaze is some bubbling and pinholing. Really not sure why this is happening on some pieces and not on others..perhaps the bisque surface wasn't completely free of dust and dirt etc, as some of the ware has been sitting around for a while.
The test piece below was coated with a stoneware matt transparent glaze, and the decoration brushed on top with a mix of 50/50 red iron oxide and yellow iron oxide. It's quite easy to paint onto this unfired glaze, but there's always a danger of disturbing or smudging the surface..I much prefer working directly onto bisqued clay. The glaze is very unobtrusive and just enhances the natural colour of the clay slightly. I rather like the combination of muted colours here.
The next trial pieces are interesting where I tried out a Japanese recipe for nami jiro glaze. This is a very simple recipe consisting of 50 ball clay, 50 wood ash and 5 to 20% kaolin (according to Lee Love, the proportion of kaolin is varied depending on where the piece is to be placed in the kiln. Thank you, Lee, for sharing this information!). I used washed oak ash and 5% kaolin over a clay body which is 50% original raku and 50% Earthstone Original stoneware. Where raw ash is used, I'm thinking that such a high dosage must make the glaze slop pretty caustic, so care should be taken in handling.


The trial on the left shows nami jiro over black slip, with the slip and glaze applied to bone-dry clay. This glaze has produced a pleasant oatmealy colour on the clay body, with a very matt finish. On the black slip itself it's created a slight sheen. Used on its own, I would prefer the glaze to be a little glossier, which could no doubt be achieved by adding a bit more potash feldspar to the mix. But combined with a glossy oribe glaze in contrasting areas of a pot, it could work really well. The brushwork has stayed clear and dense, which is what I was hoping to achieve.

The piece on the right is the same glaze but the brushwork was done with 50/50 red iron oxide and yellow iron oxide. It's clear that the yellow iron oxide is a weaker pigment (as it contains some clay) and the decoration has faded somewhat, especially at the top where the tile was double-dipped.

Lastly, I re-tested the Leach 4321 tin glaze, but added more tin oxide, which takes the tin oxide content from 2% to around 3.5 to 4%. The test tile has come out quite nicely, but I was pretty amazed to see that the glaze was glossy and completely clear! It's really gobbled up the red, black and yellow iron oxide decoration (on the other side to the one shown), but the black slip has stayed fairly well defined..I think because only the 15% black stain has survived. So I could probably get the same effect by just adding Mason's black stain to a kaolin/ball clay slip.

Why has all the tin oxide disappeared completely? I'm not sure, but I came across something online today which says that the Leach 4321 glaze is a cone 8 recipe. So maybe taking it to cone 9 is over firing and makes the tin oxide act more as a flux instead of an opacifier. Food for thought...

NB. All the test pieces and the large tea bowl were fired in oxidation.
Never give up..the best is yet to come!﻿
Posted by Mark Smalley at 08:02 No comments: