As planned, I electric-fired several different slips under two types of glaze to compare the results. Both the iron slips were a 50/50 mix of the oxide and a white slip. The black magnetite slip does indeed give off oxygen at cone 10 (in oxidation), perhaps slightly more than the red iron oxide! It certainly produces different kinds of bubbles in the shino..more of a honeycomb than open pinholes. The key difference is that the black magnetite slip stays a much darker shade of brown, and looks blacker under the shino glaze (top half ). 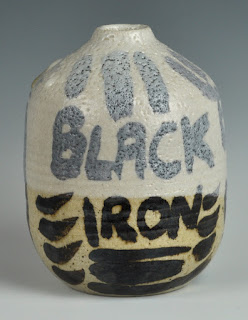 The black iron produces a very rich, dark brown under a transparent ash glaze (bottom half)

The red iron oxide (synthetic) produced a less dark brown, which looks reddish purple under the shino. The bubbles in the glaze seem to be smaller, although this is also affected by glaze thickness. It's worth noting that where the glaze is very thick near the top of the jar, there's rather alot of pin-holing going on over the bare clay too. 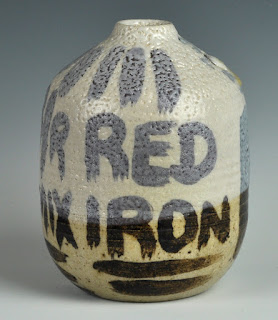 Interesting that the Masons black stain has come out a very similar shade of brown to the red iron oxide under the transparent glaze, but looks darker under the shino, very similar to the magnetite slip:

The Masons stain has also bubbled a fair bit, though less than the magnetite. To my eye, an equal mix of black and red iron slips looks more like the red iron than the black: 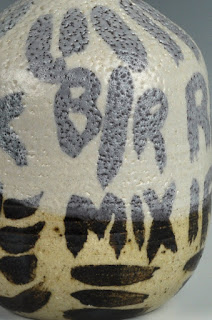 Finally a couple of pieces I decorated using black and red slips:


So what have I learned from all this? Magnetite slip seems to give a richer, darker colour under transparent ash glaze, but is harder to decorate with due to the larger particle size. To minimise bubbling and pinholing with either material under shino, the secret is very thin glaze application. (I'm also wondering if a heavily crawled shino may help in allowing trapped gases to escape around the glaze) Of course I've yet to try genuine black iron oxide, FeO .. but I don't know where I can buy it. Does anyone know of a good source in the UK?
Posted by Mark Smalley at 10:48 No comments:

Here are a few of my best pieces from the latest firing we unloaded on Wednesday this week. We had a beautiful mild, sunny day for the firing and a freezing, damp day for the unpacking.

Many thanks again to Sarah Villeneau, Penny Withers and everyone else on the team for their help in making the firing a success.
Posted by Mark Smalley at 02:55 No comments:

Recently I've been making some forms which were partially influenced by ancient artefacts such as burial urns. I thought a bronze-like finish would be ideal for some of them, but I'd never come across any suitable recipes, apart from manganese-based glazes, which I'm reluctant to use because of potential health hazards. By a complete coincidence, I fired a couple of pots yesterday in saggars, and lo and behold, the glazes came out heavily reduced and looking rather like bronze! Well, various shades of dark green, grey and purple, which reminded me of the patina one sees on some ancient bronze objects.


I also fired some pieces with the matt ochre-ash glaze in oxidation, and these came out quite strongly yellow in colour. This glaze is very much affected by depth of application. When thicker it can turn quite blue-green from the ash content, and where thinner it can be red-brown to black. This time the thickness was moderate and even, so the colour is a fairly solid yellow with a few dark brown areas where it has broken on ridges. The yellow does have a slight green tinge to it, which I think is because the ash in this glaze batch contains alot of pine. I'm interested in developing a glaze similar to Japanese Ki-Seto and this matt ochre recipe (which I have adapted slightly from John Jelf's original formula) comes reasonably close, especially in the way it develops red-brown "scorch" marks in places.

Well, I fired the kiln again yesterday, this time with a lower firing transparent glaze on the pots. Took the kiln up to cone 6 with a short, 15-minute soak at the end to get the cone fully over..and shock, horror, I got some bloating again on the pots!! Have to say, I am a little annoyed about this, as I used this clay five years ago in the same way, and it easily managed cone 6 and 7 with no problems.

As with so many things these days, the manufacturers meddled with the formula of this red stoneware clay and have made the body quite alot smoother. I didn't know that when I bought these two bags a couple of years ago! I'm sure this change has made the body more prone to bloating..a coarse clay will release trapped gases more easily.

Anyway, the pieces below came out fine.. so now the quest is on to find a clay which will withstand cone 9 and fire to a dark brown in oxidation. Am I asking for the impossible?

Black iron oxide: not necessarily what it says on the tin


I was reading Nigel Wood's fascinating book, Chinese Glazes, yesterday and came across a section on the technology of northern Cizhou wares. Particularly interesting to me as they made glazed wares coated with white slip and decorated with black-slip painting (produced from the late 11th century AD). Chemical analysis of the glaze has shown that the main component of the black slip was magnetite, the magnetic form of iron oxide, Fe3O4. It is not clear from the text whether magnetite was still present as Fe3O4 in the slip after firing (to 1240 - 1290 degrees C), or whether it had been wholly or partially transformed into one of the other molecular forms of iron oxide.

Apparently, magnetite is quite difficult to grind into a fine powder, so one wonders if the 11th century Cizhou potters had the technology to pulverise the raw mineral, or whether they collected it as relatively fine-grained deposits found in river banks and beaches, as this artist, Zachary Kator has done.

Many of the Cizhou pots were also made using sgraffito techniques, the pot being coated with successive layers of white and black slip, then carving and scratching the design through the black layer. It's interesting to speculate whether magnetite was used because of it's larger particle size compared to other forms of iron oxide. This kind of decoration would be very difficult to do with fine red iron oxide as it would almost certainly stain the white slip layer with pigment.


For the past year or so, I've been experimenting with various formulations of black slip, and had begun using black iron oxide (what I thought was FeO) on the basis that this could reduce the amount of oxygen given off by the slip at temperatures above 1232 degrees C. Above that temperature, normal red iron oxide Fe2O3, begins to decompose to FeO, giving off oxygen atoms as it does so. I've found that this can cause thicker shino glazes to bubble and blister quite severely when fired in oxidation at cone 10, so I thought using black iron oxide might alleviate the problem.

Many years ago I bought a tub of "iron spangles", the name given to a very coarse form of magnetite that looks a bit like silvery iron filings..this is usually used to create a speckled effect in clays and glazes. However, I just read a post in Clayart from 2000 by David Hewitt (1925 to 2006) where he showed that most black iron oxide supplied in the UK is in fact a more finely ground form of magnetite, Fe3O4, not Fe0 ! This is quite significant, as magnetite is said to decompose to red iron oxide under gentle heating ..which in theory renders pointless my attempts to use black instead of red iron oxide!

But the thing I find intriguing is that magnetite in its finely ground state seems to give a more intense black colour than red iron oxide at stoneware temperature. And yet magnetite is supposed to turn back into r.i.o. (Fe2O3) at only red heat. According to David Hewitt, Fe3O4 heated to 1000 deg C in oxidation gives 1.5Fe2O3 .

In Nigel Wood's text, it is argued that "the status of the magnetic iron oxide used on Cizhou pottery, would have been preserved by the generally oxidising-to-neutral firings". So this begs the question, does some or all of the magnetite finally decompose to FeO in the same way that r.i.o does above 1232 degrees C? If it does, then it should be giving off just as much oxygen as red iron oxide at high stoneware temperatures. It seems that red and black iron oxides do behave very differently when heated, as shown in this podcast about iron oxide use in foundries. It suggests that red iron oxide gives up oxygen more readily than the naturally occurring black oxide.

I also remember reading somewhere that the Japanese use a type of brown iron oxide for under-glaze painting on Oribe style pottery. I'm wondering if this might be a mixture of black magnetite mixed with some red or yellow iron oxide..perhaps an unprocessed mineral which has been ground to a fine powder.

Well, I'm not a glaze chemist, so I intend to carry out a fairly unscientific test of two clay slips made with equal proportions of synthetic r.i.o and black iron oxide (magnetite). I will visually compare the depth and intensity of the fired colours, and the amount of oxygen given off simply by comparing the amount of bubbles produced in the glaze.

I know this is probably not very interesting for most people, but thanks for reading..and please do leave a comment if you can shed any more light on the subject.

I managed to get the kiln up and running again this week..the bottom element had burned right through and needed replacing. The first stoneware firing with the new element wasn't a great success as the red, stoneware clay I'd used on some of the pots bloated very badly. I guess I was taking a risk as it's rated to 1250 C and I took it to cone 7, pretty much on the limit. Most stoneware clays you can push a bit further, but not this one it seems, so next time I'll have to use a lower firing transparent glaze.

I like the effect of the white slip over dark clay..the big problem is finding a stoneware clay which will turn dark enough without a reduced atmosphere.


The guinomi below has just the depth of surface I'm looking for. It was made from re-cycled stoneware clay and fired in reduction first time around, in a saggar, then re-oxidised in this firing. Surprising how much shinier the glaze is on this piece, perhaps because it was fired twice.


I also tried out a new glaze made with cornish stone as the main ingredient:


I think the glaze needs to go alot higher, perhaps cone 9 or 10 to get a full melt of the wood ash in there. Cornish stone can give similar results to potash feldspar but contains more silica and less of the fluxing oxides, which is why I included a fairly high proportion of washed ash (18%) in the glaze. Well, all this may be fairly irrelevant, as I read on the Potclays website that they stopped mining this stuff in 2008! They do make a synthetic substitute, but it looks expensive, and whether it fires the same is another question..
Posted by Mark Smalley at 04:24 2 comments: