Some recent results from the electric kiln

I've been meaning to update my blog for some time, and now that Tim Lake (thanks so much, Tim!) has very kindly mentioned it in a recent article in Ceramic Review, I figured it was high time to upload a new post.

Weather wise it wasn't the greatest of summers .. a constant procession of windy days has stopped me firing the gas kiln outdoors more than a couple of times, so I returned to using my electric kiln for bisc and glost firings for a while. Incidentally, I don't view electric firing as in any way inferior as a method of producing pots .. the results are different, but can often be stunning in their own way. However, I do think it is more difficult to create visually arresting glaze surfaces in oxidation, and I enjoy the challenge of trying to produce something new and exciting using this method.

Lately, I've been playing around with applying thick textures to my pieces and am now working on developing new glaze and slip recipes which will work well with more random and irregular surfaces. One of the things I want to create is a greyish glaze, probably fairly matte with some variegation in hue. I managed to create a grey slip easily enough, using black iron, manganese and cobalt (also one with nickel oxide instead of the manganese) but the same combination in a more fluid glaze has proved unpredictable to say the least. This is the closest I've come so far, but the black iron and/or manganese in the glaze gave it a rather brown tint: 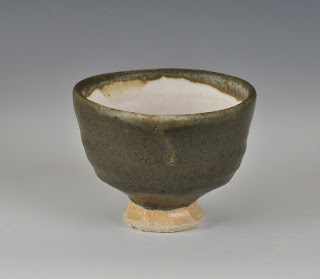 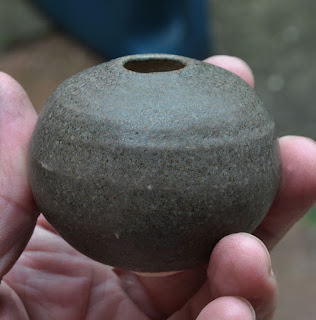 Interestingly when applied thinner, the cobalt begins to dominate and more of a blue-grey appears with specs of brown. As is so often the case, I rather like the result but it's still not really what I'm aiming for. On another test piece I used equal proportions of cobalt oxide, nickel oxide and black iron oxide and less wood ash than the recipe above to make the finish more matte. The surface texture of the glaze turned out perfect but the colour reminded me of greeny brown cowpats, not quite what I had in mind! Funnily enough, where it overlapped with a white shino glaze on the inside it was actually a wonderful charcoal grey in places! Such is the chemistry of glazing .. complex and sometimes impossible to fathom. I plan to try reducing it in a saggar and see if this changes the colour to something easier on the eye. If anything interesting occurs, I'll post a pre- and post- reduction photo in my next post.

Update 12th Nov: actually I managed to take a shot of the piece today, so here is the before photo: 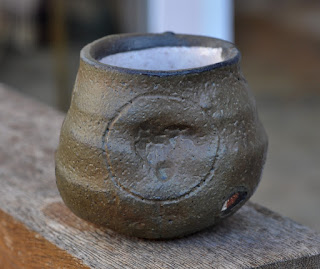 I am very taken with the texture and feel of this glaze .. and I suspect that the colour would be darker if applied more thickly. You can see the small area of greyer glaze around the inner rim at the back of the cup.

Anyway, the search goes on ...

Oh, and one other thing which really amazed me recently. The celadon coffee cup below had been fired in the gas kiln to earthenware temperatures with a little reduction .. and the glaze came out completely unvitrified but one could see that it had already taken on a distinctly grey colour. The piece was later refired to cone 9 (around 1260 degrees C) in the electric kiln and of course, I expected the glaze to oxidise and come out a shade of amber yellow. Incredibly, it stayed this beautiful pale grey with some iron bursts, so even at a temperature well below 1200 degrees C, the glaze surface must have been sufficiently sealed to prevent the iron oxide molecules from re-oxidising. That may not be surprising to some people, but I for one didn't know it was possible. 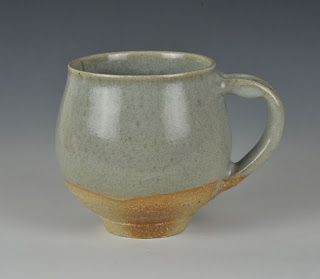 Here is a selection of pieces from my recent firings, a few of them are now available in my folksy store:

Thank you for looking!