I've just found a very interesting article by Vince Pitelka at the Appalachian Center for Craft, Tennessee Technological University, which goes some way to explaining why my black slip is bloating and blistering at cone 8 and above:

This is what he says about slips (or engobes) which contain 10% iron oxide:

"There is a fundamental problem with any all-purpose base slip recipe, arising whenever making black and brown slips, which might contain 10% iron oxide.  Red iron oxide is refractory (melt-resistant), but any reduction firing and all high firing will convert it to black iron oxide, a very powerful flux.  A slip base formulated from a standard porcelain body might contain 25% potash feldspar, and the addition of 10% iron oxide will produce a serious flux overload, often resulting in boiling, blistering, and crawling at high temperatures.  To address this problem, we use two versions of the base slip recipe.  One contains 20% potash feldspar, and is intended for all colors except black and brown.  The second version, intended for black and brown slips, contains 12% potash feldspar in order to compensate for the addition of the iron oxide."

So, as well as decomposing above 1232 degrees C and letting go of oxygen molecules, red iron oxide also converts to black iron oxide, which has ten times the fluxing power of r.i.o.!

I haven't used porcelain slips (or engobes) but I was using a red clay as the base for my slip, which may contain around 5% or more r.i.o. and then adding an extra 4%  r.i.o., so the slip may have become overloaded with it. Both manganese and cobalt also act as fluxes, thereby adding to the problems. As a next step I plan to make a dark slip (probably more dark brown than black) using a stoneware clay plus 6% black iron oxide, 4% manganese dioxide and 2% cobalt oxide. I'm hoping that the use of black iron oxide (FeO) will avoid the release of oxygen under the glaze, and the lower concentration of iron will reduce the likelihood of the slip layer blistering.

The other interesting point made is that thin applications of slip can be made opaque by adding zircon, something I'd only used previously to make pure white glazes.

Here's one of my bottle vases from the last firing, with poured black-slip decoration..this one came out with no faults:

Posted by Mark Smalley at 15:41 No comments:

I recently acquired this oribe bowl by Japanese potter, Tetsuya Kowari. Isn't it wonderful? The glaze combines so beautifully with the rough texture of the clay, and inside the dark glaze has pooled, creating these amazing crystals and rainbow-like colour effects. I had no idea that crystals could form like this in a copper glaze. I'm guessing it requires very slow cooling to create them. 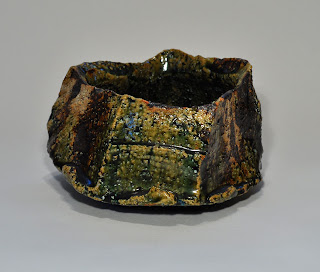 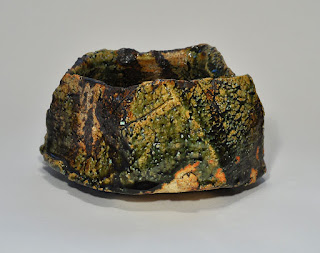 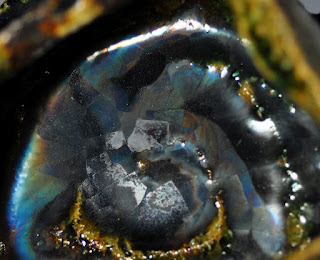 Kowari-san also produces fabulous anagama-fired, ash-glazed pieces. More of his work can be seen here at the Naganawa Gallery: http://shop.yumetenpo.jp/goods/goodsList.jsp?st=naganawa.jp&category=11:5&action=category
Posted by Mark Smalley at 06:43 2 comments:

Well, I just about managed to get a firing ready last weekend, despite the sub-zero temperatures. I tried out several new approaches to decorating and glazing, some of which worked really well, others much less so. For the shino-glazed pots I was using a new saggar, the rim of which turned out to be slightly uneven. Some air must have leaked in between the rim and the kiln shelf (which I use as a lid), making a few of the pots oxidise and the glazes bubble and blister very badly. I'll have to go back to sealing the gap with kiln fibre.

The two pots below have crawled quite alot, but I still like them:

Another experiment was to apply oribe glaze over an iron oxide slip. I wanted to leave some areas of the clay body exposed, so on this small jug I brushed the glaze on:


I'm very pleased with the outcome and will use the technique again. I think maybe the glaze needs some extra copper oxide to make the green darker, and so it will flux and run a bit more..just need to be careful it doesn't end up all over the kiln shelf! With the sake cup below, I masked sections with a polyurethane varnish (instead of using wax), then dipped the pot in the glaze as normal. This worked very well, except when the pot was fired, the varnish burned, peeled off and took some of the (unfired) iron oxide slip with it. Note to self: always apply the iron oxide before the bisque firing.

Finally, I made a few vases and coated them with black and then white slip while at the leatherhard stage. After bisque firing, a transparent ash glaze was applied. These pieces really have me puzzled since one came out perfect..


..while two other pieces were covered in tiny blisters under the white slip, like the bloating one would get in over-fired earthenware. I figure that the bubbles were caused by gases being expelled from the black slip layer, and the white slip and viscous glaze have formed an impermeable barrier. Hmmm, that's my theory anyway..and I'm not sure how to solve the problem, except by experimenting with different formulations of black slip.

I was wondering if using black iron oxide (Fe0) would help as it won't decompose, releasing oxygen as red iron oxide does. If anyone has any advice or thoughts on this one, I'd be really interested to hear them.

Never give up..the best is yet to come!

Minus 8 degrees C last night and the temperature has been hovering around minus 1 or 2 most of the day. And now it's snowing quite heavily! We're just not used to such extremes of temperature here in middle England, but I'm proud to say, I still managed to throw a few pots this afternoon. The main reason being that a kind neighbour has loaned me an old gas heater and I bought a 12kg bottle of butane from the local garage. Hurrah! Calor Gas is really expensive these days, but it's pretty much the only way I can carry on working in these arctic conditions. Next winter, I'm either moving into a heated studio or moving to another country.
Posted by Mark Smalley at 08:36 No comments:

Trying out the new carving tool

I'm really enjoying practising with the new carving tool I made the other day. It allows me to make a variety of concave cut marks..the curvature of the blade also provides a bit more freedom of movement as it can swivel and twist under the surface quite easily. Here a couple of pieces I carved over the last couple of days:

It's a refreshing minus 6 degrees C here this morning, so I'm wondering if all the clay has frozen solid. The electric kiln is buzzing away for a biscuit firing, so hopefully that will warm things up enough so I can work in there later on. Then at the weekend I can finally get on with preparing a glaze firing..it seems like a long time since the last one.
Posted by Mark Smalley at 03:28 No comments: