The weather has turned rather nasty here..quite chilly and lots of heavy rain. Not normally ideal weather for throwing pots, but I've had a couple of good days in the workshop. This is partly because I have a new clay which seems to be very pleasant to throw with; ES60 smooth textured crank from Valentines Clays Ltd. It's an open textured, coarse stoneware which can be used for hand building and sculpture too, but it's not so rough that it's painful on the skin. Fires 1280 to 1300 and appears to contain a little iron which may give it some colour in wood firing. If the glaze firings are satisfactory, I may well stick with this body as I am rather fed up of mixing clays and the endless wedging involved!

I've also tried a bag of Oxidising St Thomas, which has a lovely light brown colour and creamy texture (it almost looks edible) but is a little too smooth for my liking. I find clays with a fair amount of grog better suit the forms I make and don't collapse so easily.

Today I also discovered a new way to throw with the recycled and mixed clays I've had so many problems with. When firm, they became too non-plastic to wedge and simply broke apart, so I tried throwing with very soft, saturated clay and using the minimum of slip as lubrication. I found to my surprise that it's not so difficult to pull the clay up with barely any slip on the clay and that just wetting my hands a little was sufficient to stop the pot catching. I have read many times that one should throw with as little water as possible, but with many smoother clays, that proved extremely difficult. The coarser clays seem to make this easier as the surface isn't so tacky. So, I'm happy that all my recycled clay isn't going to be wasted!

Here is a tea caddy I threw this afternoon: 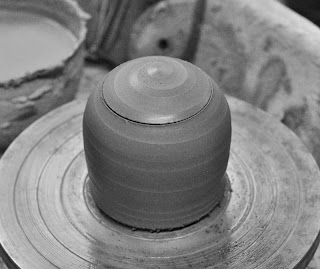 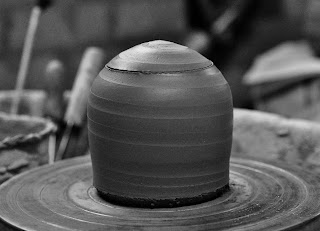 I used a metal rib to add the swirl pattern and the lid is partially cut through with a needle. I will do the final cut once it's leatherhard.

I love doing these closed forms, because once the air is trapped inside you can really play around with the shape and apply alot of pressure to the outside with tools. I think I'll make some more of these tomorrow.

Some pots from the latest firing

I never know quite what to expect when I open my electric kiln. Even the relatively consistent glazes come out slightly different each time. Despite the disappointment of some pots not turning out as I hoped, I always enjoy the surprises, and the fact that I learn something new each time the kiln is fired. What were the surprises this time? First of all an ash glaze with a 6% addition of rutile, which I hoped would turn a shade of yellow, came out a very subtle beigey off-white with some greyish tones where thinner:

This might be made more interesting with some orange or yellow stain added.

Then there was the black slip glaze, made with clay dug straight from the fens of Cambridgeshire. I learned that this glaze is more matte and silvery grey when thin and blacker and shinier when thick. Also, if there are cracks in the glaze when it dries, it's going to crawl..and where really thick it's going to spit glaze onto the kiln shelf! I was really lucky, as one vase did spit glaze, but every drop landed on the bits of broken kiln shelf I used to stand the pots on. Phew. I don't mind the crawling so much, but this glaze leaves behind some black residue on the bare clay (probably from the small amount of cobalt oxide) which is rather unsightly. Here is an egg cup which crawled a little: 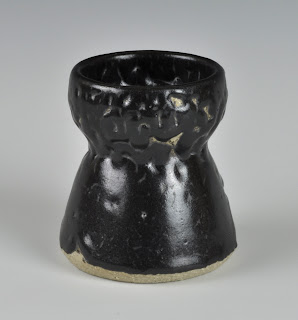 Some of the other pieces with the fen slip glaze:


I had mixed together the translucent ki-seto glaze and the opaque nami-jiro, 50/50 to see how it would look. The result is more transparent than opaque, and tinged with green from the wood ash:

I also made up a Ki-seto glaze with washed ash and around 3.5% yellow iron oxide. Not sure what happened here; the glaze application is extremely thin in places and the glaze has a strong green colour:

Quite surprised if all the green is coming from the wood ash as this is mainly oak which usually gives more yellow-brown tones in oxidation, however the yellow iron content may be too high also. I'm wondering if a yellow tint would be easier to obtain with less wood ash, perhaps by partly replacing it with whiting. A paler clay body with little or no iron content may help too.

Very pleased with this little sake cup which was glazed with the Leach Old Seto Yellow. I think the wood ash content here was around 35% and it works nicely over the groggy clay..I love the way some of the alkalis in the wood ash have vapourised and turned the foot a nice toasty brown, not something one achieves too often in an electric kiln:

Next, a few pieces glazed with the ochre ash glaze. This glaze never ceases to amaze me with its variability, depending on how thick it's applied, the type of clay body, how quickly the pot was dipped after stirring the glaze..etc.

The colours can range from black to rust-red, to orange to yellow and grey-green.

A vase with my new Oribe glaze:

And finally, the one and only saggar-fired piece: 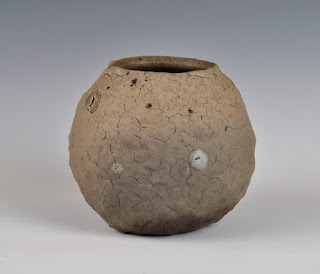 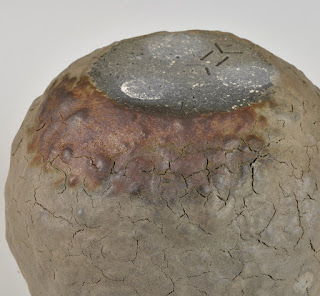 Hmmm, I'm liking the cracked texture alot, but colour-wise the result was rather bland .. it's a pity the whole pot didn't have the same finish as this small patch of the surface which turned a wonderful iridescent gold-rust colour. Not entirely sure what caused this as I put a mix of things in there (charcoal, wet banana skin and fresh cherry pips!) .. perhaps it was the cherry pips. I've put elderberries in raw in the past and the juice from those added a silvery iridescence to the pots ..it's something I've been meaning to try again for some time. I'll have to wait for the elderberry season  in September.

A warning about sharp sand

Here is the lidded container after a bisc firing yesterday.. there are some nice, natural cracks developing in the surface: 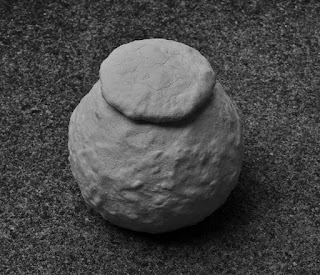 I will have to wait and see if the texture holds together okay. I had to discard several pieces last week because there were some tiny fragments of plaster under the surface which erupted, many days after the bisque firing. I am fairly sure this was caused by "sharp sand" mixed into the clay slip. Sharp sand is very coarse and gritty...little did I know that it was contaminated with plaster, and plaster in clay = nightmare!

Today I also tried to stir up some high-feldspar shino glaze which had settled into a rock-hard lump at the bottom of a bucket. Instead of scraping away at the surface with a metal spoon for ages (and cursing a lot) as I've done in the past, I worked a finger down the side of the bucket and prised large chunks of glaze off the bottom. Then the lumps could be gently squashed between the fingers and dissolved quite easily. Once I got it moving I added a little epsom salts (magnesium sulfate) to flocculate the glaze.

It's been a lovely warm day, really feels like summer at last and perfect weather for glazing pots. Hoping to get the electric kiln loaded and do a glaze firing towards the end of this week.

A couple of new forms

I made a couple of new forms (new to me at least). A heavily textured tea caddy, influenced by neolithic cultures:


Tried something new with this. The piece was scored with random lines as the wheel was turning, before doing a final couple of pulls. The faint score lines remain faintly visible under the throwing marks.

I'm still having problems with my clay not being plastic enough, and I've decided it must be the raku clay which is adding way too much grog and sand to the mix. It holds together well when fairly wet, but begins to fall apart as soon as the clay gets to a firmer consistency (that is to say, the firmness I'd ideally like to throw with), even when mixed 50/50 with a much smoother clay. The advantage of all that grog is that the clay stands up really well, even when quite sloppy. Feel I'm spending too much time mixing and wedging clay at the moment, so I'm on the look out for a good quality bagged clay, fairly groggy with some tooth and one which can withstand cone 10/11 firings...and of course not too expensive!
Posted by Mark Smalley at 04:44 4 comments: