Here is a sake cup which was electric fired recently to around cone 9. I used a satin matt, wood ash glaze containing around 5% yellow iron oxide .. it's based on an excellent recipe by John Jelfs and the only change I made was to use raw wood ash (rather than washed) and marble stone powder instead of normal whiting. For me, this glaze goes on quite thinly as the raw wood ash can make it deflocculate a fair bit, but the thicker clay on this piece meant more of the glaze was sucked onto the textured surface.

Usually it comes out of the electric kiln dark yellow and rust red where thinner, sometimes with a hint of greeny grey where thicker. What is interesting about this glaze is that it can be reduced after having been fired to cone 9 or 10 in an oxidising atmosphere.


I think I'm right in saying that most highly vitrified glazes (such as glossy shinos) cannot be reduced once their surfaces are sealed in oxidation. This piece was only re-fired to high earthenware temperatures in a gas kiln (with some addition of wood through a stoke hole) and the glaze has turned a much darker, mossy green. I'm still not certain whether the colours appeal to me, but I do like the mottled effect .. what do you think?

Not sure exactly how high it went as it was placed close to the exit flue of the gas kiln so it may have been well blasted by the flames. Nonetheless, it's interesting that the iron oxide has changed colour at much lower temperatures than the previous electric firing.

Incidentally, this is how the same glaze and texture combination looks when it's reduction fired in a saggar with practically no oxygen present: 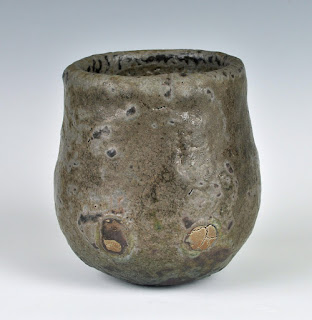