Making ceramics in a workshop without proper heating is challenging when the temperature remains sub-zero for weeks. Luckily the clay hasn't frozen solid as it it did two years ago. To add to the problems, my electric kiln decided to break down near the end of a glaze firing a few days ago, so I'm now trying to get that fixed as quickly as possible. I am reasonably sure it's just an element which has failed so hopefully the repair job won't be too expensive..touch wood.

I'm still managing to throw and carve a few pots..these two are still at the leather hard stage:

The snow is beginning to turn to slush..apparently we can expect tempest and floods next week!
Posted by Mark Smalley at 13:58 No comments:

I've just taken some new shots of this piece which was fired back in September...I'm quite proud of this one, mainly because it came out of the kiln exactly as I'd hoped. Something which doesn't often happen with wood firing! 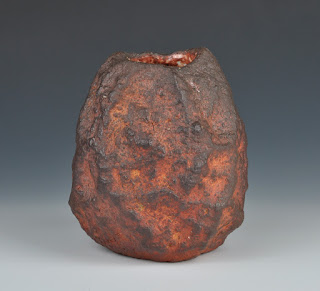 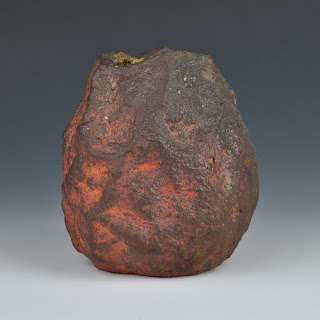 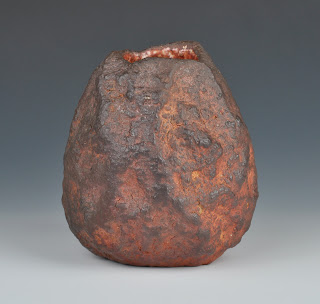 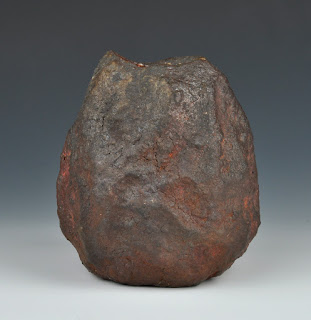 It's snowing outside, minus 2 degrees C, so I'm hiding in-doors, taking photos of pots until the kiln warms up the workshop a little. I don't mind working in the cold, but when the water buckets have iced over, that's where I draw the line when it comes to throwing clay.
Posted by Mark Smalley at 06:54 2 comments:

After months of procrastination, I've finally managed to source all the bits and pieces I needed for a new photo studio set up, including a decent graduated background. I'm not sure why, but this background seems to make it a heck of alot easier to get the exposure and colour balance right. There's much more to learn about how to make the most of lighting and backgrounds, but I thought I'd share a few pics I took this afternoon for my online shop: 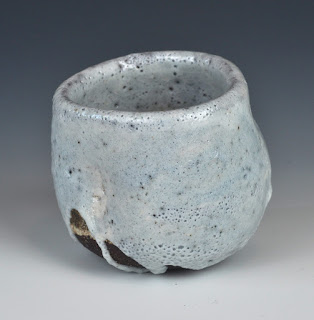 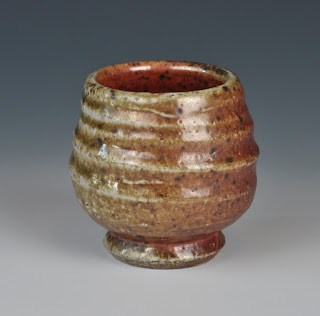 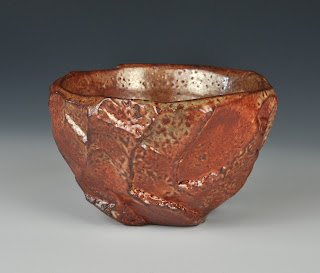 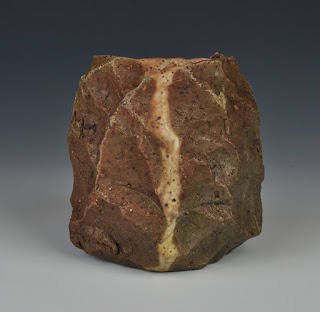 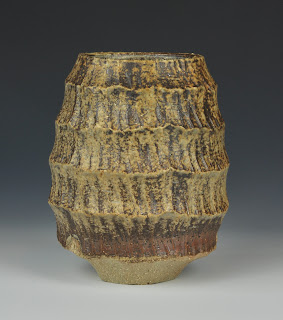 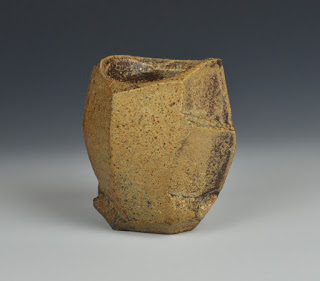 Posted by Mark Smalley at 10:27 No comments:

Here are some of the pieces from the last electric firing. Some were tests of new glaze and clay combinations..although I quite like the finish from the transparent ash glaze, the cream-white ones in particular need a darker clay under the slip to achieve the effect I'm looking for; something similar to Kohiki pottery.

Here are the two small saggars I used in the last electric firing. They are made from a very groggy clay mix (50/50 stoneware and raku) and the larger one is only six inches tall. Both the lids fit pretty snugly to prevent oxygen seeping in from outside. They worked really well in this respect..too well in fact, as one of the pots was over-reduced..charred to be exact. 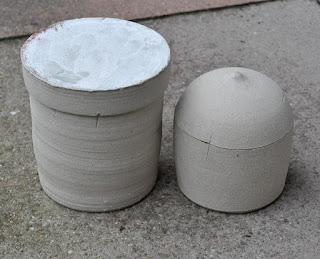 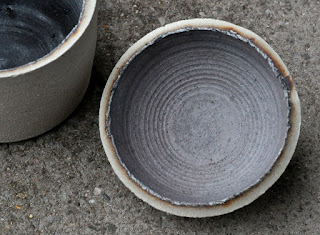 The inside of the lid has turned a wonderful shade of lavender purple..this is the kind of delicate colour I'd ideally like to get on the pots, so next time I'll fire pieces with the same clay body as the saggar!

This is the other pot which came out better..a wine cup, which had a fair amount of iron in the body, hence the very dark colour on the outside which was unglazed.


The problem with glazing the outside is that the combustibles are very close to the pots, and the intense, direct heat when they ignite can damage the glaze. With larger saggars, the combustibles can be kept further away, or placed under shelves etc. to protect the surface.

Well, I'll be trying this again in the near future..just need to increase my banana consumption; another new year's resolution to add to the list!
Posted by Mark Smalley at 04:53 2 comments:

Happy New Year to everyone!

I'm starting 2013 with a firing of the electric kiln to cone 10..it was pretty chilly at 5.30am when I went out to switch it on. I'm trying out a few new clay-glaze combinations so they are mostly small pieces of work and some test tiles. Also firing a couple of cups in individual saggars, using a combination of charcoal and banana skins (a lot more banana skins this time so hoping for different effects). Firing with saggars can be very frustrating, but I keep doing it because I love the excitement of opening the lid and seeing what kind of alchemical magic has taken place inside. The results are almost always a surprise.

This sculptural piece was fired in a saggar back in 2011. The heavy reduction turned the shino glaze a wonderful, lustrous gold colour, which I think may be due to the creation of a form of Pyrite (FeS2) , the stuff they call Fool's Gold.


Update: the firing was quite successful, apart from one saggar which had too much combustible material and the glaze flaked off in places. Cone ten was down after about 18 hours..I took it up quite slowly at first as I had a few raw-clay test samples in there. 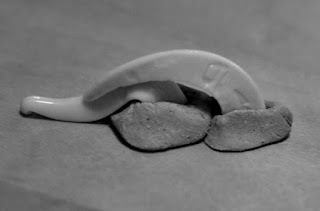 The cup in the other saggar was over-reduced too, but the result was more acceptable. Actually, the inside walls of the saggar turned a beautiful shade of pinky purple..I'll upload a pic in my next post. This little sake cup was especially pleasing as I'd used a new oribe glaze recipe. It has pinholed slightly but in a very pleasant way..the glaze had been put on rather thickly, hence the lovely, deep drips flowing over the base. 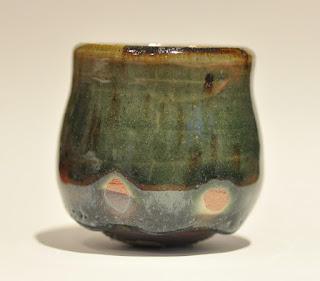 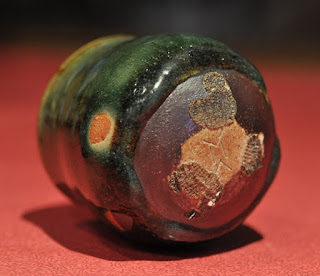 It was fired on clam shells which have left their mark, as well as effectively salt-firing the underside. Not sure I will do this very often as it may damage the kiln elements. Anyway, I'll post some photos of other pots from this firing soon, thanks for reading.
Posted by Mark Smalley at 04:20 8 comments: