I'm going through another experimental phase, trying out some new things and refinements of old things. First is a new clay from Potclays (new to me that is) called pink, grogged stoneware. I'm hoping this high-iron clay will be able to withstand wood firing and give interesting results under a white slip, and possibly under shinos. This tea bowl was been made with it, and I also tried out a different way of carving the footring, using a loop tool: 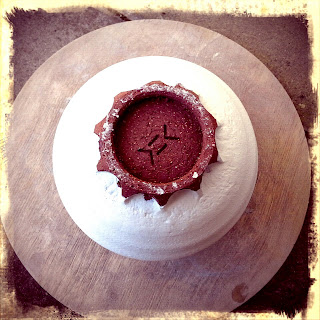 In my continuing search for the perfect black slip, I've also prepared a Gosu slip, based on one of the recipes in John Britt's "Complete Guide to High Fire Glazes". It's made with manganese dioxide, red iron oxide and cobalt oxide plus a little red clay. In John's book it says that the Japanese often mix their Gosu slip with a little green tea to aid application, so in the absence of green tea I tried it first with stewed, British tea. And I must say, brushwork with this mixture is a doddle due to the fine particle sizes..so smooth it's wonderful, with nice sharp, dense lines. This slip is designed to produce a greyish colour (hence "gosu", meaning mouse in Japanese) under a thin layer of shino, and is most likely unsuitable for use under a transparent glaze with such high oxide content.

Another current area of interest is Japanese, Ki-Seto glaze, a kind of satin-matte, yellow glaze containing wood ash and iron oxide (this page from e-Yakimono provides a summary of Ki-Seto terms) . So far, I've been unable to find a definitive Japanese recipe for this glaze, or establish whether one exists..many of the Ki-Seto pieces I've looked at online seem to vary alot in terms of the yellow colour, and the texture and transparency of the glaze. There is this well-known recipe called Old Seto Yellow (from Bernard Leach, I believe) which may be an approximation of the traditional Ki-Seto:


I will try the above recipe, although I suspect the material I have here is a pure yellow iron oxide, much stronger than yellow ochre which is normally an earth pigment with a high clay content. In fact I just read another blog where a potter said they tested the Leach glaze and it came out matte purple, which I think  may have been caused by an excess of yellow iron oxide.

I'm modifying a Nami-jiro recipe and a fake ash glaze as well, to see if I can create an acceptable, similar version rather than an exact copy of Ki-Seto. But if anyone happens to know exactly how Japanese potters prepare it, and you'd like to share your knowledge, I'd love to hear from you!


Above photo:  left is fake ash glaze with y.i.o., middle two are Nami-jiro with y.i.o., right is Leach Old Seto, altered as above. These will be fired to cone 10 in oxidation.