This sake cup has been fired twice in a sealed container to cone 10.. both times it was fired on shells, the second time with charcoal and dried banana skins. Unusually, this saggar seems to let barely any air in..only a small amount of combustible is needed to achieve complete reduction. The evidence being that much of the charcoal remains unburned after the firing. 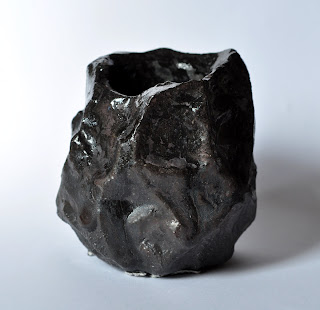 The glaze is raw wood ash over shino..there seems to have been a huge amount of carbon trapping which has produced an almost pure black in the shinier parts. There are some nice dark purples going on in there too. What do you think of the colours? I'm tempted to re-fire this piece in oxidation which will remove much of the carbon again..that might produce some interesting effects.

Update: did a low bisque firing to 800 degrees C, so popped it back in the kiln, but in a sealed saggar with charcoal as I didn't want to lose the dark colours completely. Here's the final result..maybe not easy to see on these photos, but the reddish purple hues have come out a little more, especially on the inside: 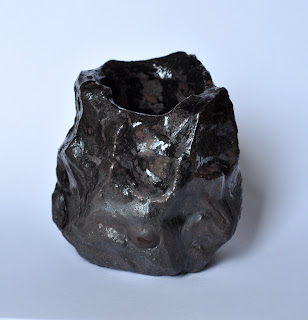 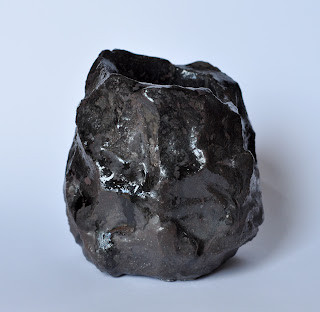 I don't usually go for very dark colours in a big way, but I'm very happy with this piece now..and having expended so much time and effort on the making, I've grown quite attached to it.
Posted by Mark Smalley at 08:52