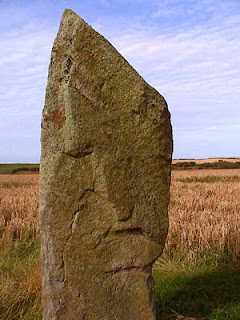 An ancient stone menhir with what appears to be a human face, naturally etched into the rock.


What we do find, in the valley below Perillos, is an enigmatic stone, which opens up new lines of research and leaves us with some questions. This stone is limestone, and thus local to Perillos. It appears to have nothing out of the ordinary, nothing to distinguish it from the so many other scattered stones that are everywhere. But a closer inspection will show that this rock is different from the rest, as it seems that the outline of the stone is that of a human face, with an open mouth. It is clear that the stone is not sculpted, but the face is remarkably there, sculpted by nature itself… In pagan days, these stones were often set aside as sacred, as they were deemed to have been sculpted by the gods themselves. Such artwork is now described as “subliminal”, though often, such as in certain Palaeolithic caves, the design was stressed e.g. by the addition of a telling line. Mankind thus “accentuated” God’s handiwork.
Posted by Mark Smalley at 09:07