So where did this glaze go wrong?


Ahem .. well.. adding an extra layer of the matt gold glaze (a simple recipe containing kaolin, manganese dioxide and copper oxide) and refiring them a cone higher didn't work terribly well! The firing yesterday went to cone 8 (and 9 as well accidentally) .. yet the gold colour of the manganese has still failed to emerge,  or rather it has appeared but only sporadically. Most of the glaze has come out dull and way too dark (as per the first attempt) and I'm rather baffled as to what has gone wrong.

I tested the same glaze on small head sculptures some years ago and they came out pretty well .. admittedly the finish wasn't perfectly even:


And decided to try this again now as I figured this glaze would work well on some of the more textured pieces I've been making lately. So the finish above was what I was aiming for, but this was a new batch of glaze, a new supply of manganese and copper oxide and these were some of the results which were very different, and on the whole, didn't live up to expectations:


Another larger vase (not shown) barely had any gold hue at all, and two layers were brushed on, so I would be surprised if glaze thickness is the issue here. Having said that I did use a small amount of CMC suspender to avoid brushmarks and perhaps this reduced the glaze thickness? It is puzzling and perhaps the new batches of materials have something to do with it. Also my electric kiln elements are new so the firing is faster than normal .. could it be insufficent heat work in parts of the kiln? Certainly the cones dropped very quickly at the end, and strangely, cone nine, which was placed directly behind cone eight, bent exactly in tandem, something I've never seen happen before. I assume this was because it's slightly further away from the spy hole, but would a centimeter or two make so much difference?

Although the colours are muted, I feel the matt metallic finish is very effective on this heavily textured vase:


I guess dipping could improve application, but I don't fancy the health hazards of making a bucket of glaze which contains 30% metal oxides! The cost for a start would be fairly prohibitive.

On the bright side, this dotty bowl was glazed with a new batch of my translucent dolomite recipe, and I was very happy with the result:


And this little hanging vase with nezumi style shino came out okay too .. a piece I've been meaning to fire for ages: 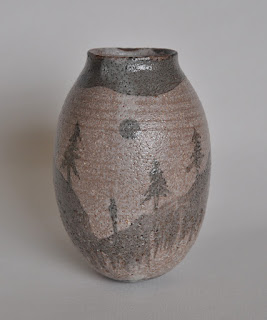 Anyway, it's Bank Holiday here today so the weather is grim, grim, grim .. high winds and lashings of rain! Which partly explains why I'm indoors tapping away on the PC. Have a great week everyone, and thanks for reading!

Update: I now think there's a good chance that the dullness and lack of gold finish is due to the china clay content being too high, combined with the clay body of the pots being very refractory. This could explain why the glaze hasn't melted sufficiently ... so, the next step is too make another batch with a higher proportion of metal oxide, and fire it a third time. However,  next time I will try it out on just a couple of pieces! Like many potters I suspect, I am sometimes guilty of ignoring the old saying "Test, test and test again!"