A temporary kiln fired with gas and wood

This week I built and fired another gas kiln, this time with the addition of a side stoke hole for wood. The interior dimensions were 18 by 18 inches wide, by 15 inches tall, which I think equates to around 2.8 cubic feet. The bottom and sides were assembled dry from a combination of heavy-duty fire bricks and light, high-temperature insulations bricks and the roof from a section of double-layer kiln fibre held in place with fencing wire. The exit flu was simply a slot left in the roof of the kiln at the opposite end from the burner port and extra pieces of kiln fibre were used as a damper.

This kiln proved quite tricky to fire in terms of getting the temperature up to 1285 degrees C but according to the pyrometer, I finally got there after 10.5 hours. At various points the temperature would stick and I had to make minute adjustments to the burner position and damper to get it rising again. No doubt the firing may have been alot quicker had I been able to use HTI bricks throughout. Cone 10 didn't quite drop but 9 was well over on the bottom shelf, where I think it was slightly cooler.

After the kiln reached 900 degrees C I started stoking occasionally with 2 or 3 pieces of pine kindling and each time this would cause a temperature drop of around 30 degrees. Over 1200 degrees this became quite exciting as large flames would shoot back at me out of the side stoke hole as the wood combusted instantly. I would like to have used alot more wood but it was so difficult to get the temperature up that I had to hold back on creating more reduction. At the end of the firing, the gas was turned off and six or seven small pieces of wood were pushed into the burner port and side stoke hole in an attempt to achieve more reduction during cooling. I felt this was necessary as the walls of the kiln and the roof are far from air-tight, and sure enough, the following day there was nothing left of the wood, barely any ashes at all.

A couple of shots of the kiln as it was dismantled:


One problem with this kind of kiln assembly is that the light-weight bricks are incredibly fragile .. they break easily when being moved around, and a few crack during each firing. The heavies take much longer to heat up but are at least fairly durable!

I think the addition of wood helped in creating intense bursts of reduction throughout most of the kiln, although it's hard to know exactly how it affected the glazes, as many of the pots already had raw ash added to them before the firing. Pots placed near the exit flu were more oxidised (example in the second photo). As usual, I was testing quite a few new glazes so the results were very mixed .. here are some of the pieces I felt turned out okay:


And below are a few test pieces I put in with my own shino-type crackle glaze. I was pleasantly surprised by these results as in the electric it was quite a disappointing glaze with a very dry and sandy finish. 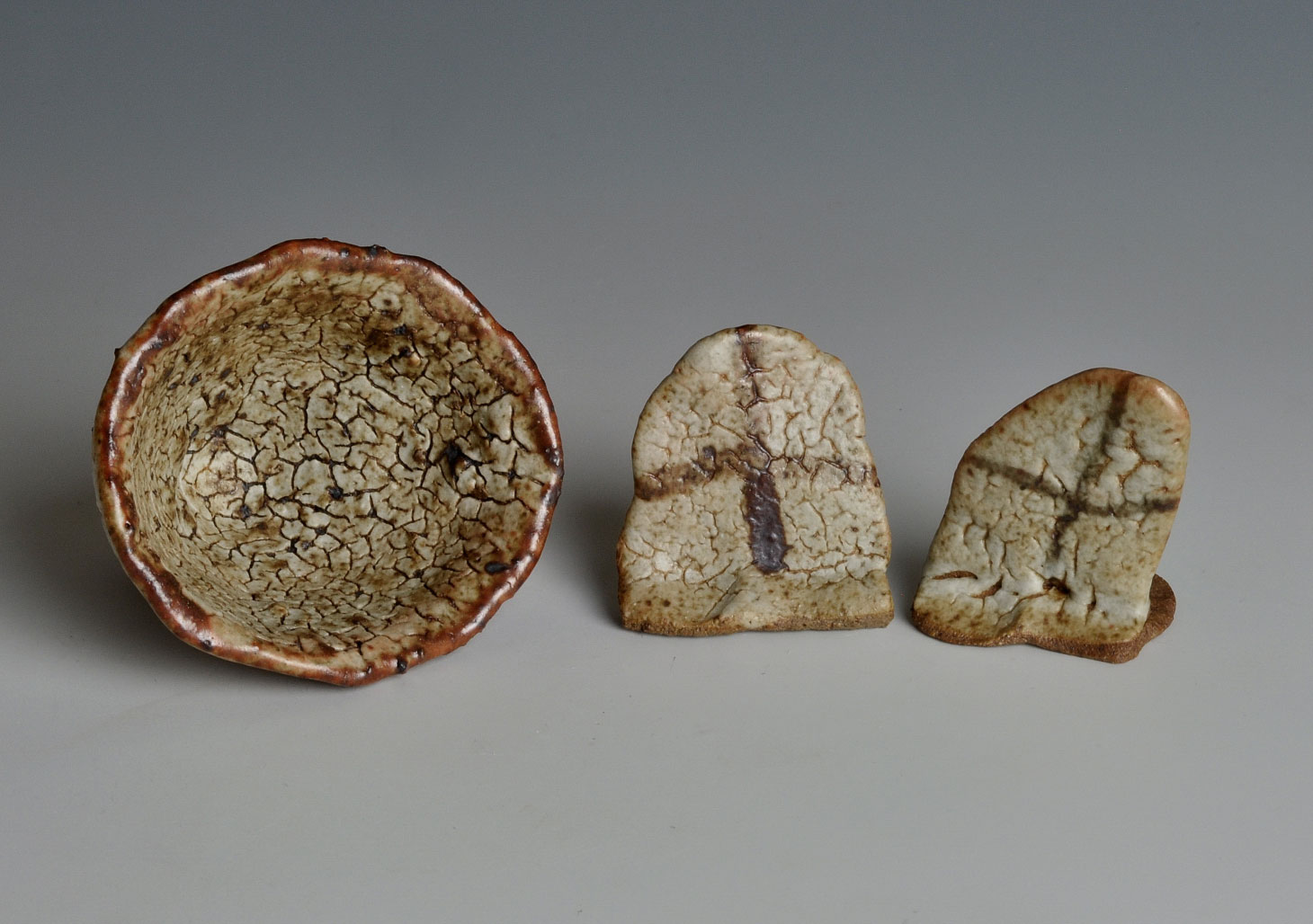 The little bowl on the left was given a coating of groggy black clay (when leather hard) and this has added an extra dimension to the glaze in terms of texture and colour. Can't wait to try this one on a larger pot!