Two days ago I did another gas firing, building and firing a small kiln in one day. This time the chamber was slightly bigger; approx. 13.5 inches cubed plus a 4.5 inch firebox on one side.

It was a rather cloudy, humid day, with rain threatening most of the time. I had hoped the firing would take around 6 hours, but in the event, I had great problems getting the temperature to cone 10. Why, I'm not sure..I think perhaps the propane burner is not large enough (45,000 BTU), although it is rated as powerful enough for this size of kiln. In the end, I could only get cone 7 down after nearly 12 hours!. The temperature was creeping up very slowly to 1220 degrees C, but then it became windy, started raining and the temperature on the pyrometer began to fall again. At that point I had had enough and turned the gas off.

In a way I was lucky to get anything decent from the kiln..these two pots were directly in the path of the flame so the heat work over many hours has melted the ash properly:

And for me, this tea caddy would have been the best piece if only the raw ash on the lid had fully melted. I was very pleased with the orange-red colour of the body as it showed I'd achieved some strong reduction in the kiln: 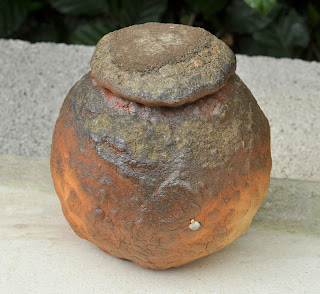 Hopefully, it can be re-fired successfully, perhaps in the smokeless wood kiln at Sheffield.

I'm enjoying experimenting with rough textures at the moment, and this piece has a slightly marine feeling to it..like a rock or coral which is being worn smooth by the waves: 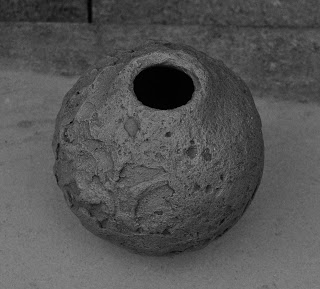 Ideally I'd like to leave some of these pieces unglazed and get them nice and crusty with ash in a wood kiln. Unless a very thin glaze is applied, it's likely to destroy most of the detail in the texture. For firing in the electric kiln, I will also try a black stoneware clay and then brush on a lighter, very matte ash glaze for contrast. Last week I put together a glaze recipe which was basically batt wash (alumina hydrate and china clay, plus 20% wood ash. Fired in the electric kiln, the result was a very white, matte, slightly pourous surface, but it did break nicely on the edges, revealing the darker clay colour beneath. It could be an interesting glaze for creating rock-like surfaces, with various stains or oxides added to it: 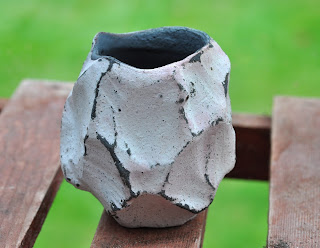 And lastly, this little piece was a glaze test, fired in the electric to cone 10. Black slip was brushed on and then sponged off, leaving remnants in the depressions and crevices. A pale matte ash glaze was then poured over the top. The small amount of cobalt oxide in the black slip has shown through as a pale blue, the overall effect being slightly pebble-like. 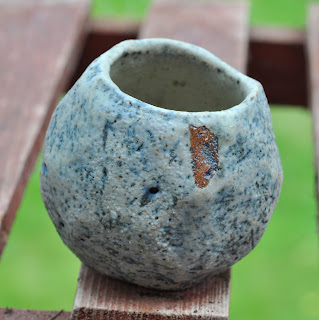 I'd really like to achieve this kind of effect with a grey under-glaze..perhaps a black-iron oxide slip would work better.