This week's firing produced mixed results. Several pieces were fired in the saggar but only one (a small cup I had glazed for the previous firing but couldn't fit in the saggar) came out with the finish I was looking for:
﻿
﻿ The other pieces I prepared for this firing came out way too dark, basically because the glaze was applied too thinly: 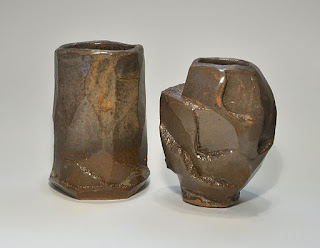 I have a feeling I may have added a little extra water to the glaze slop, thinking it would evaporate before I next used it, since the bucket lid isn't airtight. I'd also mixed in some CMC  to help with glaze suspension ( carboxymethylcellulose is a kind of organic glue ) and this appears to have rotted as it now stinks dreadfully, like no glaze I've ever experienced! Smells just like a stagnant pond! I've since learned that a side effect of CMC is that glaze dries alot slower, which I assume means that more glaze pours off the pot after you dip it. Normally, the first layer of a glaze will dry almost instantly on the bisqued surface. I think in future I will stick to bentonite for glaze suspension, not least because it doesn't go off.

Here are some of the test pieces I put in as well:

Whenever I take trial pieces out of the kiln, they usually raise another half dozen questions I would like to have answered. I'm trying to achieve a dark (preferably black) slip or engobe decoration under transparent and semi-transparent glazes at high stoneware temperatures (cones 8 to 10). The Hamada clear glaze on the right is interesting in as far as the black lines have stayed very black (which is odd, since it's absorbed the iron oxide from the background slip, which was originally orange). The other two tests were glazed with a mixture of Hamada and Leach clear glazes with a little tin oxide added. This glaze formulation was done by rule of thumb, not very scientific, but I was more interested in the effect on the slips under the tin glaze. For the middle one, I used an iron-rich clay body (a 50/50 raku and terracotta mix) and on this piece the decoration has come out somewhat darker than on the test on the left (a lighter clay body). The tin oxide in the glaze also gives the black slip a bluish tinge, with the result looking a bit like cobalt decoration on 18th Century delftware.

The lidded pot below was simply coated with two layers of black slip-glaze and it came out perfect, but another small vase blistered in several places. Based on previous firings, I had hoped that this black slip-glaze was very reliable, but it appears that more than one coat and there is a chance of peeling. It might be worth making it with a little flux added to see if it makes any difference to adhesion.