Opened the electric kiln this morning and was pleasantly surprised by the "Ki-Seto" glaze tests I did. They all came out quite dark and not terribly yellow, but I can see potential in all of them. First up is the fake ash glaze plus yellow iron oxide on the left: 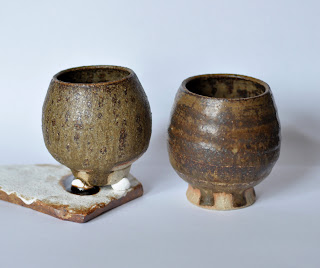 I expected this would be runny, so it was placed on a broken bit of kiln shelf..and run it did! Less iron oxide next time may reduce the fluidity of the glaze a little. The Leach Old Seto Yellow (on the right above) came out very nicely, if a little thin in places. The glaze ran but stayed on the edge of the foot, luckily. Here is the test piece with Old Seto but only half the amount of ash: 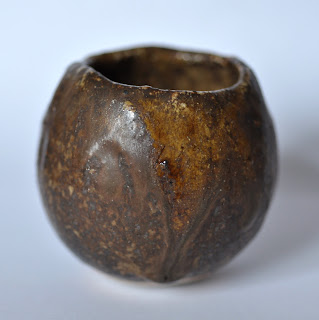 Finally the Nami-Jiro glaze with additions of yellow iron oxide: 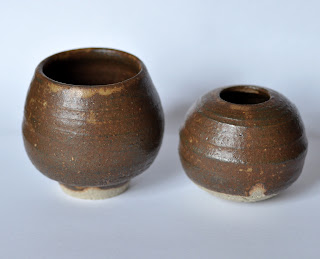 I like the rich, matte yellow hues produced on these pieces where the glaze is thicker, but overall, the brown tones are not very exciting. The problem with many of these heavily ashed glazes is making the slop thick enough, and then preventing the glaze from deflocculating. (Update: having read a piece about Hamada's glazing technique, I've realised that for this type of ash glaze, I need to bisque much lower, perhaps only 800 - 900 degrees C. That should allow the clay to take a thicker coating of glaze, but of course one then needs to consider how to deal with bigger potential glaze runs..)

This last piece was coated with a matte ochre-ash glaze I've used many times. It also produces lovely yellow tones where thicker, but this glaze slop was made with mainly pine wood ash, so it turns a kind of blue-green  when applied very thick. The shiny patches are splashes of Oribe, turned amber by the iron in the ochre ash glaze: