When we fired the Manor Stokes wood kiln in February, there were little gaps left between vases and bowls where we could have sneaked in quite a few small pots. It seemed such a waste, I vowed to make a stack of little pieces for next time, and today I set out with the intention of making a series of egg cups. I've never made an egg cup before in my life, and soon realised that I couldn't quite remember exactly how wide an egg is, and how much space I'd need to allow for clay shrinkage. So for the first hour I made shot cups instead: 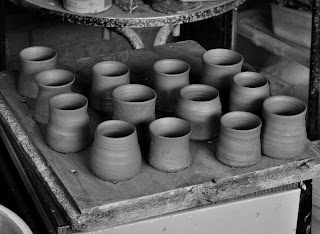 Eggs for lunch and now I have a hard-boiled egg to use as a measure. My design will be nothing complicated..just a small cup with a flared rim to accommodate the egg.

I'm starting to glaze other pieces for the wood firing too. This is a carved sake cup, which I cracked deliberately by pushing out the sides. Actually the crack is rather bigger than I intended, but it could be filled half way without it leaking. And half a cup of this size is probably enough for most people! 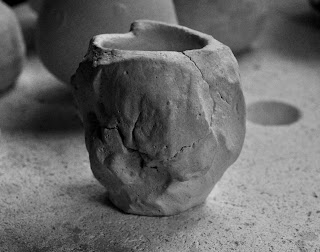 Several pieces made of the pink grogged stoneware have been slipped and bisque fired. I test fired a small sample the other day to 1300 degrees C and it survived okay, so I'm hoping wood firing won't present any problems (namely, the dreaded bloating). These two cups will be fired with a transparent glaze which should reveal some of the darker clay beneath: 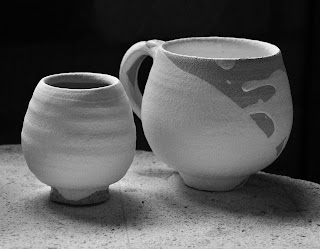 I've produced quite alot of textured pieces this week without a clear idea about how they will be fired or how they should ideally look when finished. Most likely, they will be fired unglazed..I think adding large amounts of ash or glaze is likely to obscure the texture..but on it's own, it may come out a little dull. Actually, making the surface itself look interesting before firing is the most difficult part.. 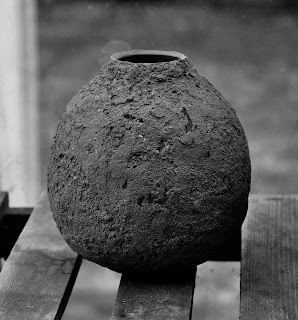 Back to the egg cups. It's hard to resist making the top section into a rounded form, partly to allow for different sized eggs ..the ones I threw today ended up looking a bit like chess pieces: 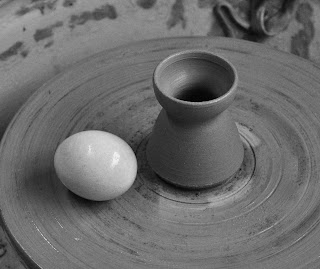 I made six and I'll measure one of them to see how much the diameter shrinks after firing. Making alot of small pieces is quite therapeutic..it's rewarding to be able to see a finished piece on the wheel in a few minutes, and you get into a nice rhythm of throwing.