New texture and a new saggar

Yesterday I bought four kiln shelves, some shelf supports, a saggar and some shelf off-cuts to act act as fire-grate bars in my mini wood kiln. Everything apart from the saggar was second-hand, and I had the kiln shelves cut to shape so that three of them can become the roof of the kiln and the firebox. Remains to be seen whether they crack..they're not really designed to be used in that way.

Here's the new saggar, it's just deep enough to contain three to four cups, but hopefully it will last for many firings. The top should be perfectly even so, provided the shelf is flat, it should make an air-tight seal, although it doesn't matter if a bit of oxygen gets in: 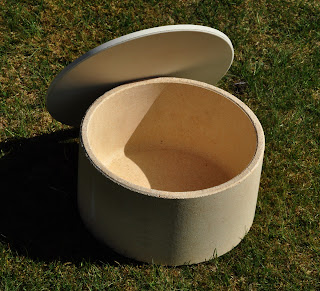 In the old days in Stoke-on-Trent, every bottle kiln used saggars to protect the ware from smoke and debris, and they were two a penny, practically disposable. Now the ceramics industry has declined and technology has moved on, they are as rare as hen's teeth..and as far as I know, no company makes them in the UK any more.

Playing around with rough textures again too..this is the latest concoction: 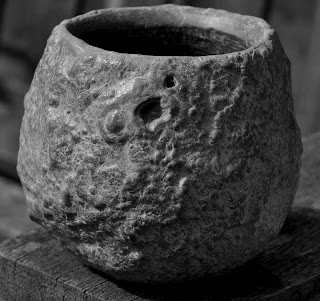 The clay is only half-dried in this photo. Not sure how it will fire (that is to say, whether bits will erupt and fall off!), but at the moment it makes me think of toad skin.

And finally, I took a picture of these pots mainly so I can remember which glaze I put on them. This is a matt ash glaze with an addition of rutile: 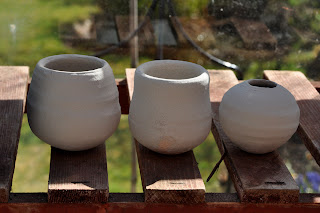 I can't wait to see what colours these will fire to, in oxidation and reduction. One of them will be fired in the smokeless wood kiln in Sheffield next week and the other two in the electric kiln.