Satnavs have their limitations!

A few pics from my ride to Aberdaron in Wales yesterday. Overall, it was a fabulous day for a bike trip, although the morning was cold and cloudy going through the Welsh hills..it brightened up later and actually turned very warm. 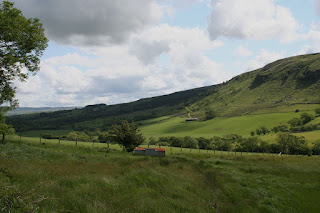 I love using the satnav, but sometimes a paper map would be far more useful. The problem is you can't easily get an overview of where you're heading or where you've been (and when the sun's out, I can't see the screen at all, so I rely entirely on the voice commands from it) ...and the problem with North Wales is that there are only a few roads through the mountains. On the way back, I wanted to take a shorter route east via Wrexham, but I missed a (what turned out to be vital) turning onto a minor B road (B4410), and the satnav then took me north again on a second scenic tour of Snowdonia..at one point I was working my way up the side of a mountain, then round a couple of enormous lakes, and eventually found myself twenty miles further away from home! The views were spectacular, and I can really recommend driving this route (unless you have a wide car or mobile home, then it would be a nightmare):

Due to this massive detour, the return trip ended up being 180 miles instead of the 120 I'd planned. Oh well, it was great fun, although my wrists and bum were killing me after 300 miles in the saddle in one day, much of it along twisting, bumpy roads, some of them covered in treacherous gravel..I probably spent half an hour by the sea and eight hours on the bike. But that's the thing I've learned about biking; it's the getting there that counts, because often, there's no time left to enjoy the destination!

Much as I enjoyed this day out, I don't think I'll be doing it very often..I just worked out it cost me around £41 just in petrol...gulp. On the plus side, I found a pound coin in the car park.
Posted by Mark Smalley at 05:11