Some more work from the last firing

I'm just getting round to photographing all the pieces from the last firing. I have to say that although I enjoy taking pictures of pots, it is ridiculously time-consuming, as I don't have a permanent studio set-up. That's why some of my pictures are taken outside on the patio, if it's not too rainy, cloudy, sunny, windy etc..

Here's the box with the stuck lid which is now unstuck..I'm very happy that it finally came off without any damage. To apply the glaze accurately around the lid edges, it was brushed on, hence there is some variation in texture and colour .. in this case, I think it works pretty well 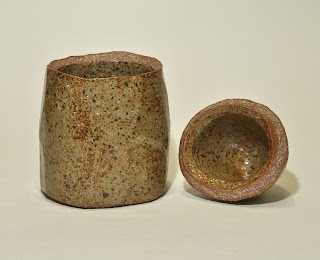 This carved shino cup is a bit too large to be a sake cup, so for me, it's probably more suited to red wine..it literally rocks as it's balancing on one edge of the base. Amazingly, it still stays upright (just) when full of liquid! Interesting too, how a small impression made with a thumb on the outside, has so much more impact visually on the inside.. 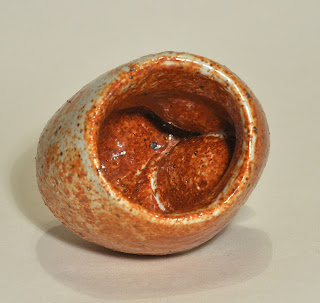 I was very pleased with the oribe glazes in this firing, they came out perfectly with no burst bubbles. Quite often, when I fire this glaze I will find a single, sharp-edged crater somewhere on the pot, as if placed there just to annoy me! In the case of this carved yunomi, the glaze was applied thinly, so the iron oxide spots have just bled a little rather than running down the pot. 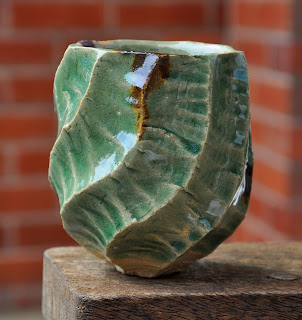 Lastly, a shot of a couple of test pieces. I doodled on these with a fine brush, using different types of slip. The disappointing thing was that the lower temperature ash glaze tends to eat iron oxide from the black slip, like so many transparent glazes. I think this is because I added 6% frit, which contains quite alot of calcium oxide. The slip with very high iron content (on the right) has remained solid in places, and not in others..this comes down to painting technique and the consistency of the slip, something I need to work on. Should I be using an underglaze medium rather than just water, I wonder?

What I did like about these tests was the multi-layered effect..in some places there are four layers of slip decoration. I'd like to experiment more with these effects, the problem being how to brush decoration on without smearing the layer beneath. These test pieces were bisqued twice, with decoration added between the firings..not something I want to do with every pot I make! 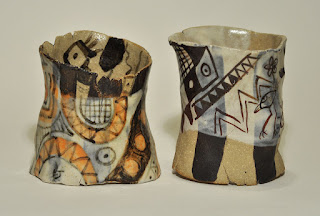