It was raining alot today, and as I walked through the garden, a wet, shiny stone caught my eye. It looked very unusual to me, because I've never seen a stone before which looks as if it's been cut perfectly in half. The cut side is absolutely flat and smooth, like ground glass..there are no markings from sawing or sanding. There are a few tiny chips around the edge but no damage at all on the surface, not even a scratch. That in itself seems a bit weird, when it must have been knocking around the garden for years. 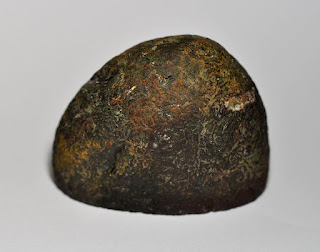 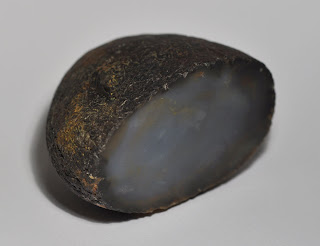 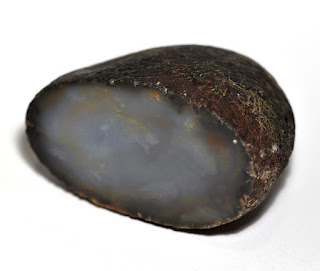 The outside has an organic, wrinkled texture, almost like a seed, whilst the inside is like a translucent marble, or flint. The muted colours remind me a little of an anagama-fired pot. It's too cloudy to see inside it, but there are vague crystalline structures going on in there.

I'm sure geologists would provide a perfectly rational explanation (perhaps it was a geologist who discarded it), but I prefer to think that aliens cut it in half with a laser, and took the other half home as a sample. ;)

Update: someone on facebook has told me it's probably flint..is this how flint stones break then, with these perfectly flat, clean surfaces? Maybe it's not so mysterious after all..
Posted by Mark Smalley at 12:14