Some nice glazes and interesting discoveries

The latest firing of the electric kiln was not entirely successful, but I was very happy with some of the pots which came out. The Nuka glazes in particular worked very well indeed, having been put over a new slip formula which has reduced the fluxing slightly and retained more of the unmelted silica..that is to say they are a bit more white and opaque than before. 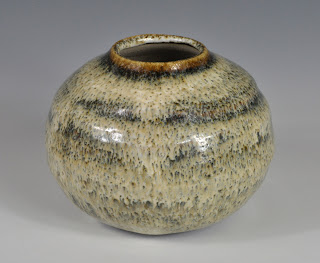 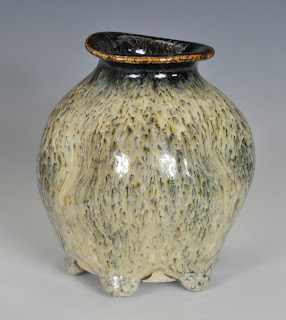 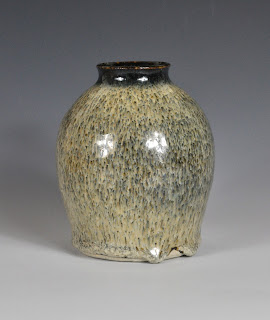 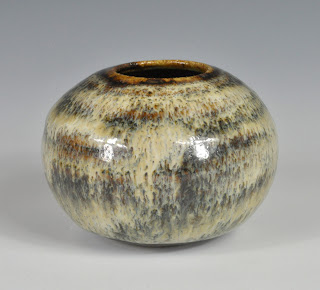 I have to be careful with this glaze though..when applied thick it does like to run down the pot, and in some cases drips off it! In future I need to leave at least half an inch of space at the bottom to allow for this.

I also tried a new glaze combination; a crackle shino over matte calcium glaze applied to a sake cup. It was fired in a sealed saggar with heavy reduction from charcoal, and the result was very pleasing: 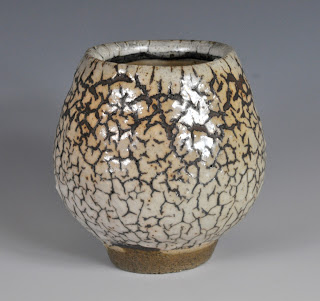 The last couple of firings I've used an external pyrometer as well as cones, and I've found this very useful in monitoring the rate of temperature increase. The pyro' seems reasonably accurate, so I can see almost exactly what temperature the pots next to the thermocouple have been fired too. This carved espresso cup with oribe glaze was fired to 1275 degrees C with a half-hour soak. I noticed that the oribe pot placed on the higher, hotter shelf was slightly pinholed, leading me to the conclusion that I may have been slightly over-firing the oribe in the past by going to 1285 or higher. 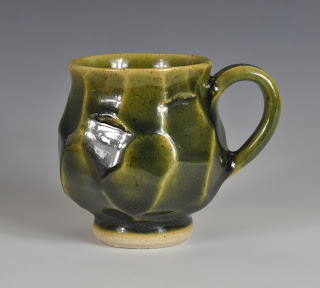 Alongside these pieces I also fired a number of test glazes, mainly with high alumina slips and matte ash glazes. All the glazes contained copper oxide and this combined with metal oxides in the slips to create really dark colours..a little disappointing as I was hoping to achieve some green hues as well. 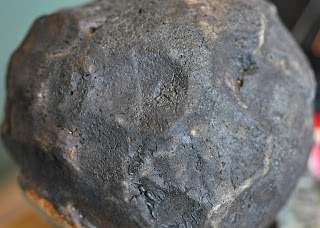 Nonetheless, the results were extremely interesting. The matte ash glaze has made the underlying slip crack and crawl in places, which is an effect I'm trying to achieve. It also cracked and peeled in an interesting way over the Valentines black clay..the glaze is very dark brown where thin and and a paler brown where it's pooled in the nooks and crannies: 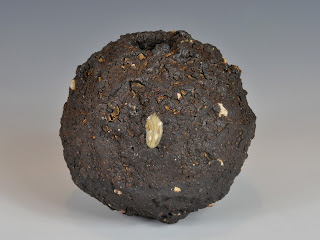 I groaned a little when pulling this vase from the kiln, thinking it was way too dark, and a blob of Nuka had dropped from a pot from the shelf above and landed squarely in the middle! But having lived with it for a few days, it's really growing on me..it has a strong, individual character.

Finally, I layered two different matte ash glazes (containing black copper oxide) and a dolomite glaze on this piece..it actually has five layers of slips and glazes in total! The results don't look terribly inspiring in the photo but the surface tells me a great deal about how the glazes and slips are interacting with each other. The most interesting thing here is the way the copper dolomite glaze (the paler blobs) is quite matte over one glaze, but more glossy and green over another..where thin it's also darker, picking up colours from the base slips: 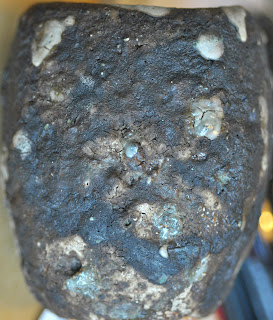 The more highly fluxed ash glaze has sealed the base slip (the black patches), whereas the high clay matte glaze has made it crack and split like dried mud. The dolomite glaze definitely has potential, I really like the variety of colours and textures it produces.