The other day it was Guy Fawkes night, the 5th of November, and the weather brought back strong memories of childhood, when it was often misty and freezing cold and the smoke from hundreds of bonfires would create a thick fog across the town. The combined smells of wood smoke and exploded gunpowder are extraordinarily evocative. Seems amazing now that in those days we kids were allowed to light our own rockets in milk bottles, throw Bangers around and stand so close to the bonfire that your face would hurt.

Not the best weather for making pots in a studio with no central heating, but I'm trying to make the best of it. If the clay is still too wet for throwing large pots, I focus on making small pieces like these bud vases. 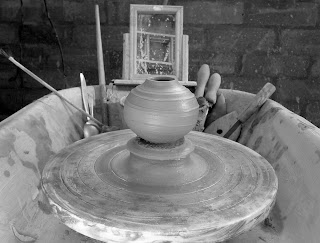 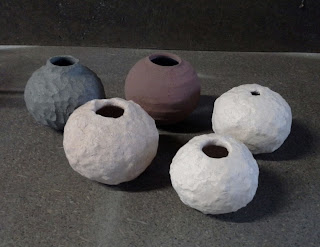 I gain a great deal of satisfaction from throwing these rounded forms off the hump. The extra height makes it easier to watch the whole form emerging, and they are often finished when they come off the wheel..that is to say, the bottoms don't need an extra stage of trimming.

I also did a bisque firing yesterday, which warmed things up a little..and these tea caddies are now ready for glazing. 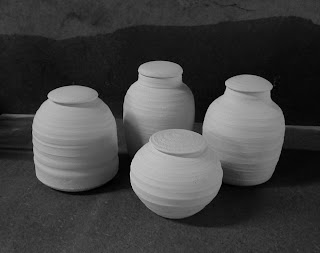 It's not easy getting lids to fit exactly, and sometimes they get damaged in the firing, or they can warp. So I'm building up a stock of spare lids which are of a similar size but with slight variations in diameter..it may be possible to match them to pots, if there's a problem with the original one.

Success with the dry glaze in the last wood firing (2nd photo down in the last post) has encouraged me to start exploring other combinations of matte slips and glazes, adding calcined alumina and/or alumina hydrate into the mix. The pieces below are just preliminary glaze tests, fired in the electric kiln, and alot more experimentation will be needed to work out exactly how the slips and glazes are behaving and interacting. The slips here had several metal oxides added, and the glaze contained copper oxide, so the colours came out pretty dark. 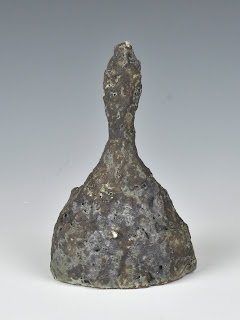 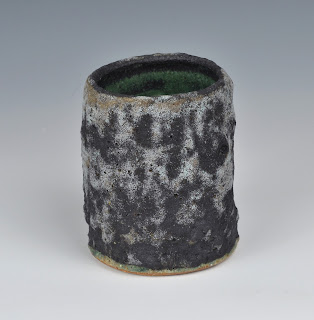 Ideally I would like the glaze layer to crawl and take on the appearance of lichen on a rock, in the same way that these previous test pieces have done: 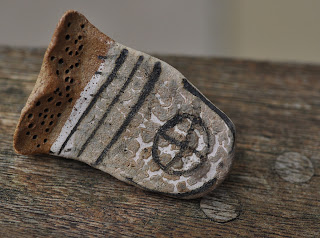 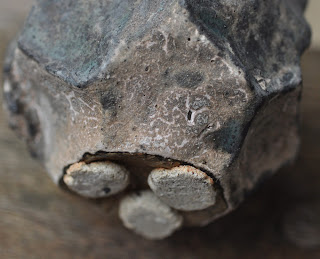 These tests were fired in both electric and wood kilns to cone 9/10. The ash glaze has crawled in a rather beautiful way, but the glaze was applied over refractory slip which had already been fired to cone 10.  So I need to find a way to reproduce this effect without having to high fire twice, which would be even more uneconomical than it already is!

Thanks for reading.
Posted by Mark Smalley at 06:12