Pots from the October wood firing

As promised, here's a selection of my pieces pulled from the Manor Stokes kiln on 8th October. Overall it was an excellent firing with good levels of reduction throughout the kiln, even at the top which is often fairly oxidized. I was delighted with most of the pots, especially those placed near the firebox which were beautifully coloured by the ash and flame.


With the Iga style vase above, I tried adding extra wood ash by mixing it with plain flour and water and applying the paste to the bisqued surface. The plain flour is used only to make the ash stick to the pot..the idea being that it burns out completely in the firing. Due to the very heavy reduction in the mouth of the firebox, the flour hasn't completely burned out, and the ash didn't get quite hot enough to fully melt, hence the very crusty surface which is rather crumbly in places. Although I like the look of this vase, it will probably need re-firing at some point.

Incidentally, I managed to bisque the very tall bottle vase in my electric kiln yesterday! The height of the kiln was extended with lightweight bricks and brought in pyramid style, round the top of the vase. 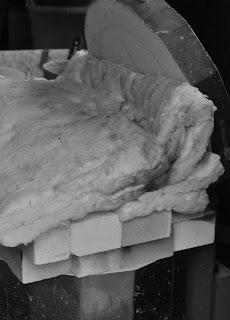 A few layers of kiln fibre for the roof and it was ready to fire. It took a little longer than a normal bisque but worked fine, I may even try this method for a glaze firing.. I think it could even work for a stoneware firing to cone 7...cone 10 might be pushing it, and no doubt there would be some problems with uneven temperature.