I fired the electric kiln to cone 10 on Friday and tried out a few more new glazes on trial pieces. The biggest surprise was the Nuka glaze recipe which I put over a dark iron glaze, made with the earthenware clay from the Cambridgeshire fens (huge thanks to fellow potter and friend, Dameon Lynn for supplying me with some of his locally dug fen clay).  I wasn't expecting alot as Nuka is a very high silica glaze, difficult to melt even at 1300 degrees C. But this was the result: 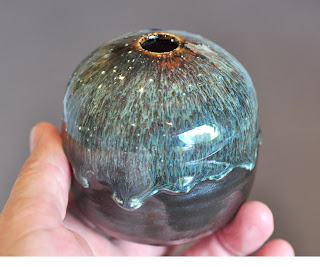 Not only has it melted fully, it's even started to run down the pot! The blues in the glaze were also completely unexpected, as there is no material in the glaze to produce this. I think the Nuka glaze must have picked up iron oxide from the dark fen glaze and it's become reduced under the sealed surface. The iron will also have acted as a flux, helping the glaze to melt fully. Amazing! By the way, the white specs are unmelted chunks of flint (the source of silica in this recipe) .. I didn't realise how coarse this material is, so ideally the glaze needs to go through an 80s mesh sieve.

Another test was this little container: 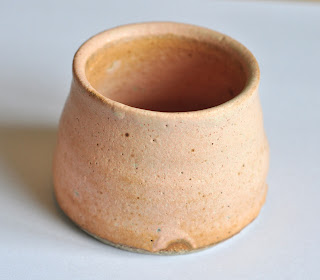 This glaze is a mixture of a matte ash glaze containing rutile and an orange slip made with a commercial glaze stain, ball clay and china clay plus a little red iron oxide. The high clay content has produced a very matte surface but one which is very smooth to touch, almost like egg shell. The rutile and iron oxide have created subtle variations in colour .. I have a feeling this will be very good under reduction.

A few more pots from this firing .. the pieces below have the Leach, Old Seto Yellow glaze with around 35% raw wood ash:

The Old Seto glaze works very differently on the smoother clay in the last photo. The finish is shinier, and the glaze hasn't run as it has on the coarser clay body. The glaze was applied very soon after mixing, and although I like these results, I think this recipe may work better once it has deflocculated a little. A thinner coating may produce more dark tones and greater variation in texture.

Thanks for reading!
Posted by Mark Smalley at 01:45