This year, I've spent alot of time playing around with new techniques for creating surface texture, and some of those experiments are starting to bear fruit. I'm also getting pleasing results from combinations of dolomite glazes with my black slip. Applying this glaze to a moderate thickness and firing to just the right temperature is critical in allowing the slip to show through while retaining the lovely, marble-like texture of the dolomite. Below are photos of pieces I recently fired in the electric kiln, all of which were taken up to around cone 9 with a half-hour soak.

The pots where the glaze has dripped a great deal were given a coating of a new glaze containing copper oxide and carbonate and this produces a very nice range of colours, from dark greys and greens to purple, pink and orange .. the tiny crystal-like orange spots which form in the glaze runs are rather special too. The textured orange-brown glaze on the first vase is also quite interesting as it was made from a mixture of ash from smokeless coal, plus some wood ash (50), china clay (60) plus 2% copper carbonate. The coal ash is highly refractory and doesn't flux to the same extent as wood ash .. also it seems to produce a similar colour whether fired in reduction or oxidation. I like the slightly sandy, coarse texture of this glaze as a contrast with the more shiny, runny copper glaze. 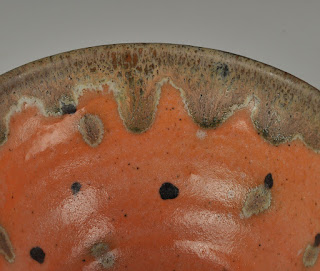 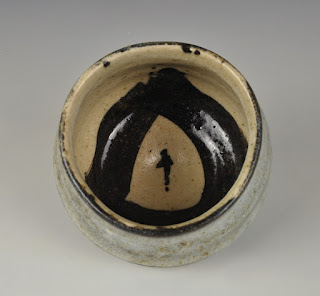