The quest for a matt grey glaze continues..


So, it's been a while and I'm still trying to develop that elusive, matt "grey" glaze! So far I've concluded that black iron oxide only produces grey either in an engobe which isn't fully vitrified, or in larger percentages which gives a very dark grey-brown, verging on black. Ideally, I'm looking for a light grey like this, but with more sheen to it:

The two test fires on the left were pleasing .. made with an engobe (clay, potash feldspar and a little raw ash), plus small amounts of black iron oxide, nickel oxide and cobalt oxide. But since I started using a new batch of black iron I've been unable to repeat it, instead just obtaining various shades of green-grey or brown. Incidentally, the test piece on the left was made by mixing red earthenware with a coarse raku body .. I've found that this combination can withstand cone 8/9 firings in an electric kiln).

The following tiles were made with a matt ash glaze (adapted from John Jelf's ochre ash glaze recipe) and varying amounts of black iron, cobalt and manganese dioxide (instead of the nickel):

The test second from left (above) was close but no cigar .. and funnily enough this was made with a cheap black iron bought from Ebay which looked more impure and browner in its raw state than those bought from pottery suppliers. The other sources of black iron produced much browner hues: 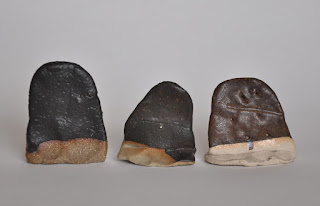 The tile on the left looks grey but is really an extremely dark brown (over 4% black iron oxide).

The most convincing grey I've concocted so far is with another engobe recipe, here applied thinly by dipping a bisqued pot, then fired to cone 7: 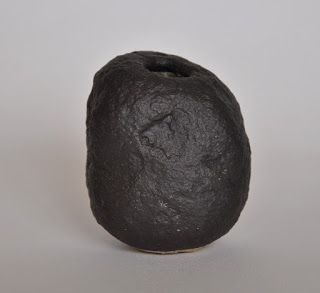 Still too dark to be used on its own, and possibly verging on black rather than grey. The engobe recipe if anyone would like to try it:

plus, as a percentage of the total dry weight: 8% black iron oxide, 3% manganese dioxide, 1% cobalt oxide

Since then, I've come across a couple more recipes which use a combination of rutile, cobalt and nickel to make grey, so this provides yet another avenue of research. Ofcourse one of the problems being that rutile can vary alot in terms of its chemical make up ..

Anyway,  I've still found time to produce a few pots here and there. Below are some pieces fired fairly recently in  the electric kiln. The dolomite glaze on the first three pieces is a mixture of the dolomite glaze I normally use ( many thanks to Rachel Wood for this recipe, found in Techniques Using Slips, by John Mathieson ), with a transparent ash glaze. The result is less opaque and allows more of the iron oxide brushwork to show through: 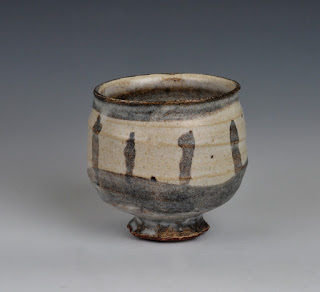 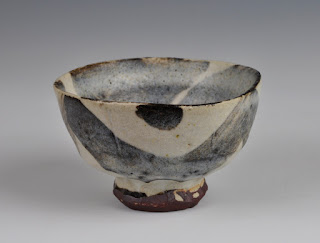 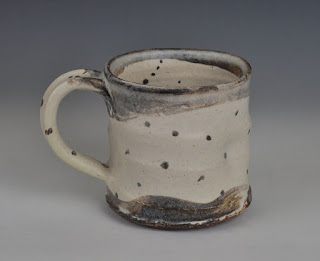 Plus two pots with the old dolomite glaze: 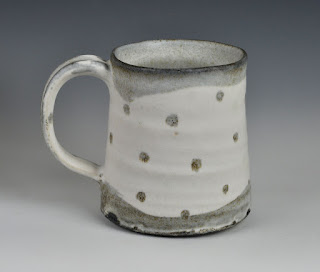 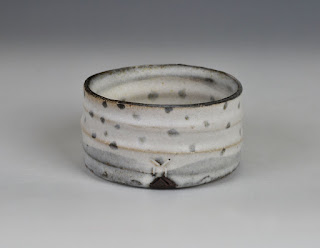 And finally, a couple from the latest firing, both with metallic glazes:

Most of the pieces in this firing were coated with a matt gold glaze (active ingredients: manganese dioxide and copper oxide) applied by brush and came out rather under fired. I was probably over-cautious in firing them to cone 6/7 only, as I didn't want the manganese to flux and become too shiny. Also, the gold colour was rather patchy, so I brushed on another layer and am re-firing them today, to cone 8. It will be interesting to see what effect the extra temperature has on the glaze, and hopefully I may have a few good pieces to show next week!

Happy Easter! And thanks for reading.


Never give up, the best is yet to come!