On the whole, it was a rather disappointing glaze firing yesterday. I fired the new saggar for the first time, and it didn't work at all in reducing the pots. I'm quite surprised, as the kiln shelf lid looked reasonably flush with the top. This was the saggar as it was packed before the firing: 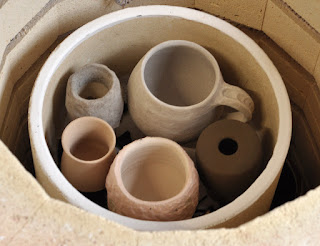 All the combustibles (charcoal and dried banana skins) had burned away, leaving a slight glaze residue in places. The only pot I liked from the saggar was this little vase which was coated just with fen slip over a brushed-on red iron slip: 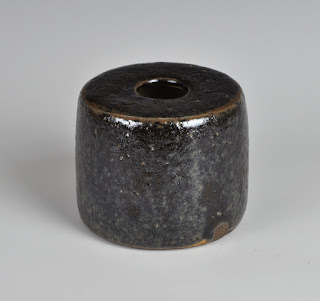 The saggar had been placed on kiln supports, so there was another layer of pots beneath. I've not done this before and it seems to have produced a rather strange and unfortunate effect. All the pots below the saggar were badly bloated on the inside, as if the additional heat generated from the combustibles had been directed downwards onto them. Most of the small pots placed on top of the saggar lid were fine..which is odd, as you would expect the heat from the saggar to rise and affect the pots above, rather than the ones underneath.

Three cups with "Candace Black" glaze from the top layer: 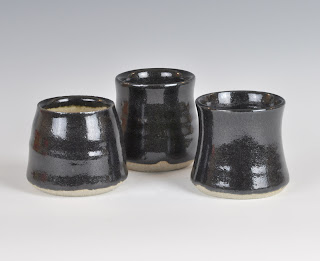 The next photo shows two cups and a test piece glazed with my version of a nami-jiro glaze. The glaze had been applied as thick as possible and it produced much more yellow this time: 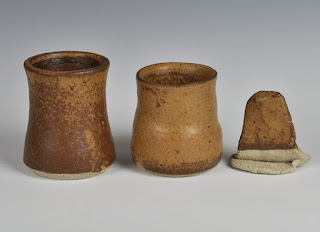 To my eye, this looks similar to some Ki-Seto glazed pieces I have seen, although the yellow colour is probably a little darker.

And this is the black glaze made from fen slip, fired in oxidation at the bottom of the electric kiln. The fen slip on its own turns matte brown in oxidation but very glossy dark brown to black in a wood kiln, but when used as the main ingredient of a black glaze, this is reversed. In oxidation, the glaze has come out with a more glossy sheen, which I like very much: 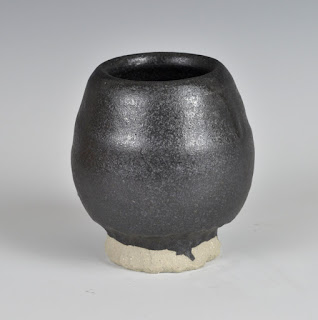 We'll end on another positive note! I think I may have finally cracked the black slip formula (I say "may", I need to test it a few more times yet to be sure). Here is the latest version, painted on underneath a transparent glaze..it's not perfectly black, but it doesn't have the metallic, cobalt sheen of the gosu slip, and the fine lines haven't faded at all: 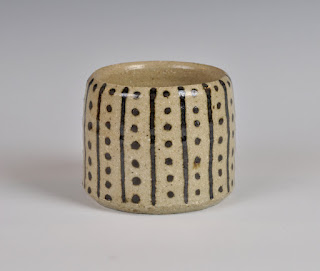 Thanks for reading.
Posted by Mark Smalley at 10:35