Nice weather for the time of year!

Autumn is upon us, but the weather this has been rather nice this week. That is to say, we've had some clear skies and it's not freezing cold, and there's alot to be said for that when the only heating you have in the studio is a small electric fan heater! All the bright sunshine we've been having seems to have stimulated the right side of my brain, and I'm having a creative spurt just now. I'm busy developing some new ideas for vessels in various shapes and sizes, mostly with lids. I've not made many pots with lids before, and I know that the problems of firing increase exponentially due to problem of glazes sticking and lids warping and so on. Partly for this reason, I'm going to start by low firing most of the lidded vessels I'm making at the moment, and use slips and terra sigillata to decorate them. I think a low-fired finish will suit many of the forms I'm throwing at the moment, so I'm happy to go down that road.

This carved pot on the other hand, will probably need to be fired to stoneware: 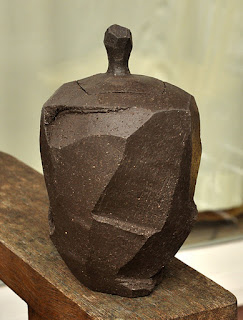 The vessel was thrown as a closed form, then carved once it became leatherhard (which takes over a week this time of year as closed forms take longer to dry out of course). I didn't really consider the pot's function as I was making it..but perhaps it would make a nice tea caddy.

Then there is the bottle sculpture.. : 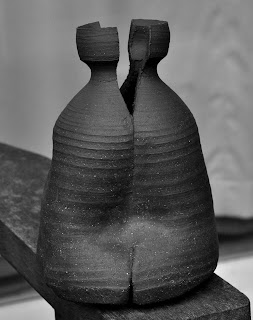 This is one of those pieces that comes about by complete accident. I'd thrown a bottle on the wheel and didn't much like the form or the heavy weight of it, so decided I'd cut it in half to check the wall thickness and then chuck it in the recycle bucket. Once I'd chopped it in two, I noticed how much the halves resembled two figures, sitting opposite each other, especially when I squeezed the middle and the necks kind of leaned back a little. Anyway, I joined them back together with slip, and this was the result..it's giving me some ideas for other similar pieces I could make, so I thought I'd make a note of it here.
Posted by Mark Smalley at 08:35