I've got the bisque-fired blues...

Yesterday was a bit of a downer to say the least. Several of the new pieces I had carved from solid blocks of clay cracked very badly in the biscuit firing..beyond hope of rescue in fact. I was really surprised and shocked, not to say dismayed, because they were some of the pieces on which I'd spent the longest time working and the ones I was most happy with in terms of the form. Why, I ask myself, is it so often the most pleasing pots which end up with the worst faults? On reflection, the answer to that, is probably that the most interesting pieces are often the ones which result from trying out new techniques, and pushing out into the unknown, as it were..and hence coming up against new problems which need solving.

The annoying thing is, I've employed this hollowing-out technique before on sculptural pieces with barely any problems. The French, grogged clay I've been using for the last couple of years, seemed to be very tolerant, very warp and crack resistant, even when the clay is left at different thicknesses. But this time, two of the vases split down the seams where the clay had been joined. Maybe the clay was too dry when I joined the two halves..or I'm wondering if I took the temperature up too quickly, given the thickness of the clay in one or two cases. I did put the kiln on a higher setting than normal during the final phase, trying to save some time, which was probably a big mistake and not one I'll repeat in a hurry. I suppose I was really pushing this clay to its' limits in terms of what it can withstand..and now I know it has its' limitations!

Hey ho, such is life with ceramics..you win some, you lose some. But, seriously, I do need to reconsider my clay body for this type of hand-built work, and probably formulate a more groggy, crank-like mix to avoid these minor tragedies in future. The other day, I did a firing test with a 50/50 original raku and grogged terracotta mix (the terracotta is earthenware clay and normally has a maturing temperature of only 1180 centigrade). It fired surprisingly well to cone 8 (over 1250 centigrade) with no bloating or sticking to the kiln shelf. But I did notice the test piece had shrunk tremendously, like to about half it's original raw-clay size, or so it seemed. I must do a scientific test to compare shrinkage with normal stoneware clay, and check my eyes aren't playing tricks. Anyway, this particular clay probably won't solve my cracking problem but it's an interesting possibility where I need a high-iron clay that will withstand a 1250 degree plus firing. It could be very useful for shino glazes, where an iron-bearing body would give a stronger, deeper fire colour.

Next I'm going to mix the raku clay and the French stoneware clay and see how resistant that is to cracking... 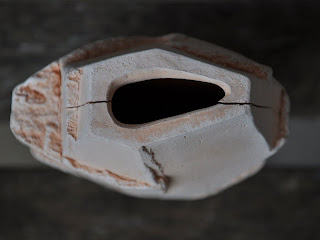 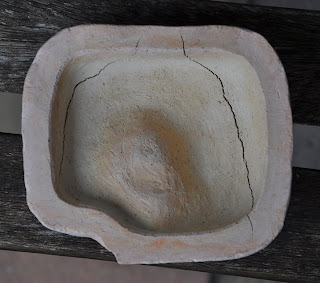